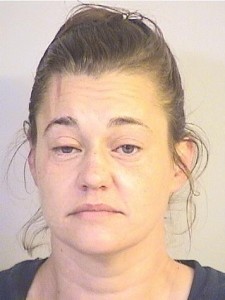 The Tuscaloosa Violent Crimes Unit has identified the woman involved in a police chase Monday morning.

Leia Darby, 37, was arrested following the chase, in which she was originally stopped because of outstanding warrants.

The outstanding warrants were for failing to appear or comply with court on previous charges.

Original story is below:

A Tuscaloosa woman who had several outstanding warrants now has even more after a police chase this morning.

The woman fled around 10:45 a.m. from West Alabama Narcotics Task Force Officers who approached the woman, who has not yet been identified.

Those officers and Tuscaloosa Police Department patrol officers began searching the area for the woman, and her vehicle was located a short time later in the backyard of a home in the 1300 block of Montclair Circle.

Several Tuscaloosa Police Officers were approaching the suspect vehicle on foot when she attempted to drive out of the yard in the direction of the officers.

The vehicle stopped and the woman was taken into custody. Police said she sustained minor injuries but was not struck by a bullet or the beanbag round.

Brookwood High School gets millions in funding for new facilities

Alabama Power on standby ahead of Hurricane Ian