Tuscaloosa comedian reflects on life and career ahead of Saturday show

The story of how Jermaine “FunnyMaine” Johnson found his comedy stage name involves a platform that was once a pop culture staple: MySpace.

“It was only supposed to be the back end of my MySpace handle,” Johnson said.

“Everything with ‘Jermaine’ was taken, and I wanted people to know I was a comedian, so I came up with ‘FunnyMaine.’ For some reason, it stuck, and here we are.”

The name was created on accident, but it has served the 41-year-old comedian well in a career stretching over 15 years, crossing paths with other comedy greats like Steve Harvey and Kevin Hart, and bringing him back to Tuscaloosa for a show at The Grocery Brewpub this Saturday, June 18.

Johnson was born in Opelika, Alabama, but calls Birmingham his hometown. He is no stranger, however, to the city of Tuscaloosa.

“At a young age, me and my brothers spent all of our summers and holidays in Tuscaloosa with our aunts and uncles,” Johnson said.

Johnson spent 12 years in Tuscaloosa, during which time he attended Stillman College before transferring to the University of Alabama.

“Both schools are near and dear to my heart,” he explained.

“Stillman, of course, that’s my heart, my alma mater. I have so many great friends and so many memories, but I also had a ton of friends at the University [of Alabama]. Both schools are tied to me.”

After Johnson left Tuscaloosa, he immediately began his professional comedy journey. It was a challenge starting out, traveling long hours on the road and performing shows for $75 after burning $120 worth of gas.

It was the long journey, however, that grew him into the comedian enjoyed by many today.

“It was a grind, but I enjoyed every minute of it,” Johnson said.

Ppart of Johnson’s journey was hosting a weekly comedy series in 2010 called “$1 Wednesdays” at BrickHouse, a former restaurant in Tuscaloosa.

“It was right across the street from the Bama Theatre. I couldn’t get many people to come out,” he said.

From there, he opened for comedy icon Steve Harvey at the BJCC in Birmingham in 2010.

With all the success he’s earned, Johnson stays true to his Tuscaloosa roots, calling it “a blessing” to be back in Tuscaloosa to perform this weekend.

“Tuscaloosa definitely shaped me, and it’s a blessing to be able to return and give laughs back to the community that gave me so many laughs, life lessons, and love,” he said. “I know my family will be rooting and “Roll Tide” -ing like they always do, and I know the community will be there to support.”

Johnson’s comedic career is only matched by his community involvement. He served as a substitute teacher for Tuscaloosa City Schools, an original member of the volunteer team when Walt Maddox was running for his first mayoral term and has also performed and spoken at various alumni functions for both of his colleges.

“It’s a family-oriented place,” Johnson said about what makes Tuscaloosa unique. “I have a lot of ties to the community, and I look forward to sharing those stories on Saturday.”

Johnson’s Saturday show at The Grocery Brewpub will start at 7 p.m. For more information and to purchase tickets, click here. 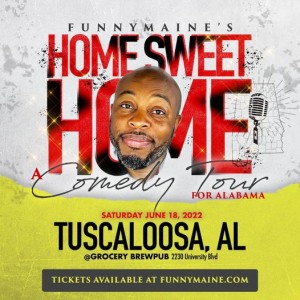 Eutaw families find themselves without a home after Tuesday's storm