Some Hale County residents remain without power after storm damage 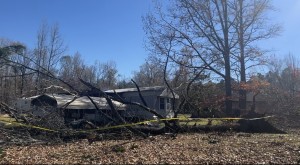 One of the four destroyed homes in Hale County

Alabama Power received help from Mississippi Power after more than 100 power lines and poles were destroyed in the area.

It’s been all hands on deck, Weeden said, and many residents are volunteering their time and tools to help clear debris following the storm.

“Some of these crews have been out here all night,” Weeden said. “We have the Alabama Forest Commission clearing roads and we have a lot of private help out here clearing the roads as well.” 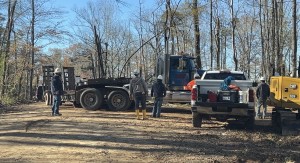 Debris on roads for miles

Akron Mayor Jonathan Rossell said no injuries were reported in the area.

“It has been amazing, to say the least. People that are here are very resilient and self-sufficient,” said Rossell.

According to a preliminary storm survey report, the tornado began near Eutaw in Green County and ended near Moundville Airport in Hale County. The estimated peak wind was 110 mph and the tornado traveled 19.49 miles. 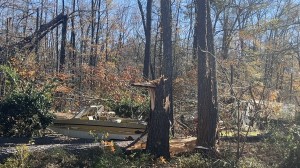 At least 50 trees damaged and down

Oak Village community resident Kaylee Moakley said it was a terrifying experience, especially as she cared for her two young children.

“The warning went off and we went into the bathroom. I had the kids in the bathtub and my aunt said ‘there it is,” Moakley said. “It was very loud. We could hear the trees hitting the house and we were praying and praying to God that we were gonna make it out of here.” 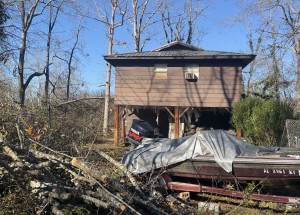 Hale County is no stranger to tornadoes. This is their fourth one to touch down in 2022. But the community is operating with less than ideal resources.

Rossell said the county has been approved for one storm shelter but they’d need at least three to properly house everyone who needs one to escape a storm.

“I hope people now kinda see this is something that we need to push for,” Rossell said. “These types of things you can’t plan for. It’s not a matter of if, it’s a matter of when.”