Zelenskyy to deliver virtual address to US Congress

LVIV, Ukraine (AP) – Ukrainian and Russian officials have held a a new round of talks as Moscow’s troops press their assault on Kyiv and other cities. Ukrainian presidential aide Mykhailo Podolyak tweeted a photo of the two sides meeting by video link on Monday but said the talks had ended for the day and would resume Tuesday. Podolyak said on Twitter earlier that the negotiators would discuss “peace, ceasefire, immediate withdrawal of troops & security guarantees.” Previous rounds were held in person on the border with Belarus, most recently a week ago, and failed to produce a breakthrough.

Meanwhile, Ukrainian officials say a Russian airstrike in the capital’s downtown area has killed one person and wounded six. The Ukrainian Emergency Services said the airstrike took place Monday near a checkpoint and caused extensive damage to a residential neighborhood. 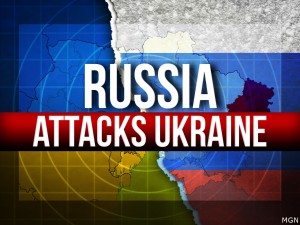 will deliver a virtual address to the U.S. Congress. Zelenskyy will speak Wednesday to members of the House and Senate. The event will be livestreamed. House Speaker Nancy Pelosi and Senate Majority Leader Chuck Schumer said in a statement Monday that all lawmakers are invited to the talk that will be delivered via video at the U.S. Capitol. Congress recently approved $13.6 billion in emergency military and humanitarian aid for Ukraine. The leaders said Congress is “in awe of the people of Ukraine.” They said they plan to convey support as the people of Ukraine “bravely defend democracy.”

US hits Russia with sanctions for annexing Ukrainian regions