Hewitt-Trussville vs Tuscaloosa County: Game of The Week 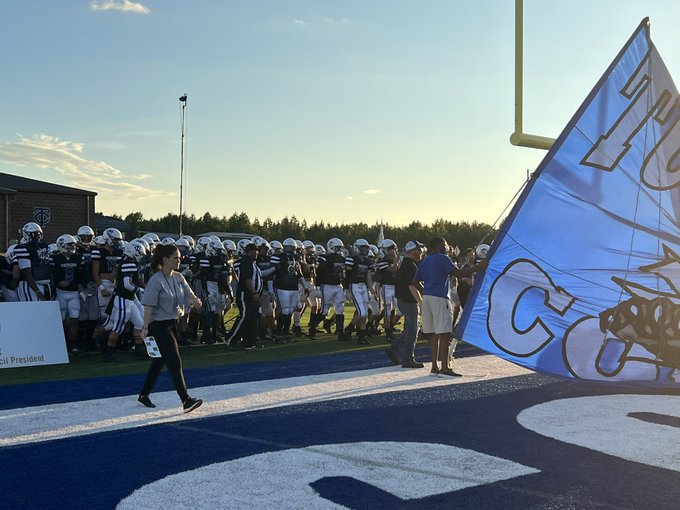 The Hewitt-Trussville Huskies went into Tuscaloosa County Wildcats and came out with a 35-7 mauling victory. The Wildcats  showed that they were promising through the first three weeks, but still have some work to do to measure up to better teams in their region.

The Wildcats displayed early determination to stand up to one of the powerhouses in the 7A region, opening the game with onside kick to set them up in good field position; However the Huskies were not willing to back down and stalled out their offense to take back momentum.

The Huskies offense got to work early and often, led by quarterback Peyton Floyd flipping a screen pass and letting Jaden Loving make a few Wildcat defenders miss and burn 73 yards to the end zone for the game’s first points. Floyd seemed to be too much to handle in the game by totaling over 300 scrimmage yards and dismantling the defense to the tune of three touchdowns.

The passing game was working so well that the lack of production from the run game did not become a big factor in the game. Running back Jaqson Melton finished with less than 30 rushing yards, but was still featured in the red zone to enjoy two touchdowns.

While the Wildcats were dominated throughout the game, running back Kevin Riley finished the contest with 114 rushing yards as he bullied the Huskies defensive line on 25 carries. Even with the solid stat line from their lead rusher, the passing game just did not connect well enough to keep the Wildcats from dropping their first game of the new season.

Hewitt Trussvile will extend their record to 3-1 and return home on a three game win streak to Host Hoover on Friday, while the Tuscaloosa County will fall to 3-1 and try to regain their confidence in a matchup against Oak Mountain. 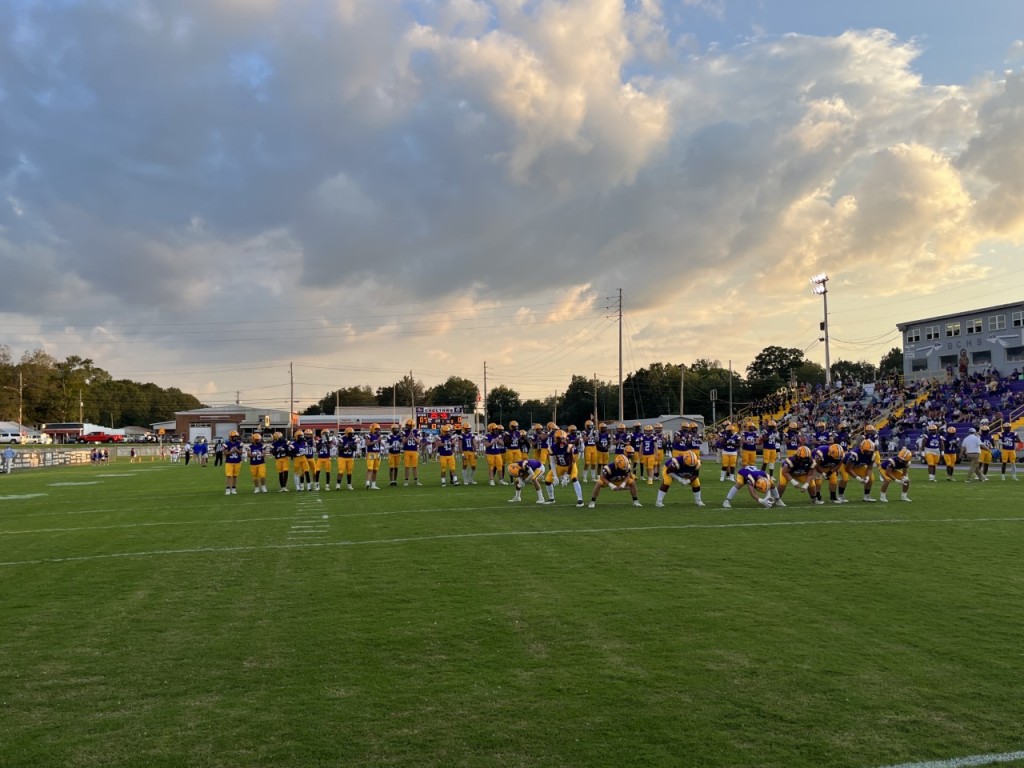 The Patriots got the game rolling early by setting up the Choctaws defense with a few runs to lure them to lean up and be more aggressive. Patriots quarterback Kai Young then launched the ball forcing a jump ball where his receiver found himself in the perfect position to come down with the play and set up the offense inside the five-yard line. The Choctaws would stand their ground and force the Patriots to settle for a field goal.

The crowd barely had enough time to catch their breath before something momentous took place on the ensuing kickoff. Colby Collums, who has been electric on kickoff and punt returns so far this season, worked his magic once again. Collums took the kickoff return from inside the 10-yard line and saw a sliver of space and left the defense in his tracks as he blazed to the end zone to put the Choctaws in the lead.

After his initial positive drive, Young would suffer a brutal night of hits. The Patriots struggled to find any open space, with the Choctaws’ defense locking down the secondary and the front seven in the backfield. All the pressure led to Young being sacked or hit on the run more than four times in the first half.

A couple drives later, the Patriots got their competitive juices flowing as a three-and-out turned into a muffed punt by Collums. As the ball slipped through his hands, a slew of white Patriot jerseys surrounded the football to set the offense up deep inside the red zone. A few plays later, the Patriots punched in six points for a touchdown to put them back in front with a 10-7 lead.

The Choctaws seemed to be zapped of energy as their offense struggled with penalties for the remainder of the first half and gave up a last second field goal to the Patriots as time expired, leaving them with a 13-7 deficit.

The Choctaws looked to turn things around by trading touchdowns with the Patriots in the second half.  Although it was great effort, the Patriots just seemed to be too much to handle until the final buzzer.

ACA walked away with a 3-1 record to start the season and get ready for their next matchup at home against Hale County. Bibb County will fall to 2-2 as they get to set up for another home game versus Sipsey Valley next week. 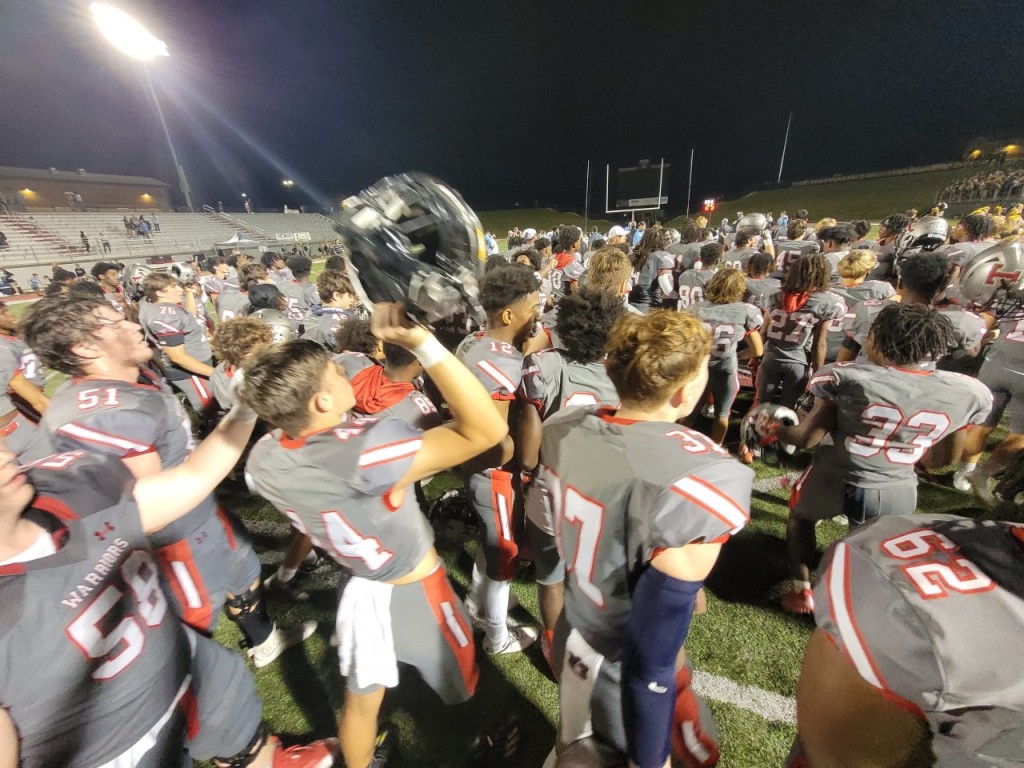 By WVUA 23 Sports Executive Producer Stu Mccann
Thompson’s only forced turnover of the game turned out to be the defining moment of its 35-14 win over Spain Park.
With under 2 minutes remaining in the first half, Thompson held a 14-7 but after a defensive stop, Spain Park was about to get the ball back with a chance to tie the game before halftime.
The Jaguars Jamari Mosley misjudged Thompson’s punt and was unable to secure the ball, which bounced directly to the Warriors Kaleb Harris for the turnover. Thompson took over at the Spain Park 20 yard line.
Two plays later, Warriors running back A.J. Green broke free for a 15 yard touchdown run. The point after made it 21-7 Thompson.
The Warriors scored touchdowns on their first two possessions in the second half to put the game away.
Next week, Thompson (2-2, 2-0) has a road game at Chelsea High School (1-3, 1-1). Spain Park (1-3, 0-2) hosts Vestavia Hills (1-3, 0-2). Both games are scheduled for Friday, Sept. 16.

Northridge cruises to a 40-12 victory over Bessemer City

Northridge (1-2) got its first win of the 2022 season at home against Bessemer City (0-4). The Jaguars were led by Junior Travaris Banks, who finished with four touchdowns, all in the first half.

Northridge had the ball first, and capitalized their first drive with a 26-yard screen from Rowdy Christensen to Banks to make the score 7-0.

Northridge dominated this game on both sides of the ball. Purple Tigers were driving at the end of the first half, when Christopher Whittset Jr got picked off by Grayson Malone. That would set up a 50-yard touchdown from Christensen to Banks to give Northridge a 26-0 halftime lead.

REFORM – The Pickens County Tornadoes (3-1) hosted the Berry Wildcats (0-3) Thursday night at G. S. Spruill Football Stadium in a game that was a one-sided affair by the end of the first quarter, as Pickens wins it 62-0.

The Tornadoes struck first on the ground with sophomore half-back Caleb Hill running towards the left side of the Wildcat defense, eluding multiple defenders as he darted towards the end zone. After the long touchdown run from Hill, Pickens County successfully converted a two-point conversion to make the score 8-0.

After taking possession, the Tornado offense did not skip a beat on its way into the end zone yet again with another touchdown on the ground, this time with junior running back Korbit Sommerville running up the middle on a draw play barreling over multiple Wildcat defenders on his way into the end zone. Pickens County would again convert on the two-point conversion to make the score 16-0.

The powerful Tornado running attack continued as Pickens County again racked up another touchdown run and would convert on their third two-point conversion to raise the score 24-0.

All hope for the Wildcats was lost after a punt from Smith was returned for a touchdown by junior wide-receiver Santonio Jones and another successful two-point conversion to make the score 32-0 by the end of the first quarter. The Tornadoes went on to defeat the Wildcats 62-0.

Pickens County will look to win their fourth game of the season as they travel to play the South Lamar Stallions at J. C. McAdams field next Friday, Sept. 16.

Berry will travel to Bill Rayburn Stadium next Friday, Sept. 16 to play the Marion County Red Raiders to try and get their first win of the season. 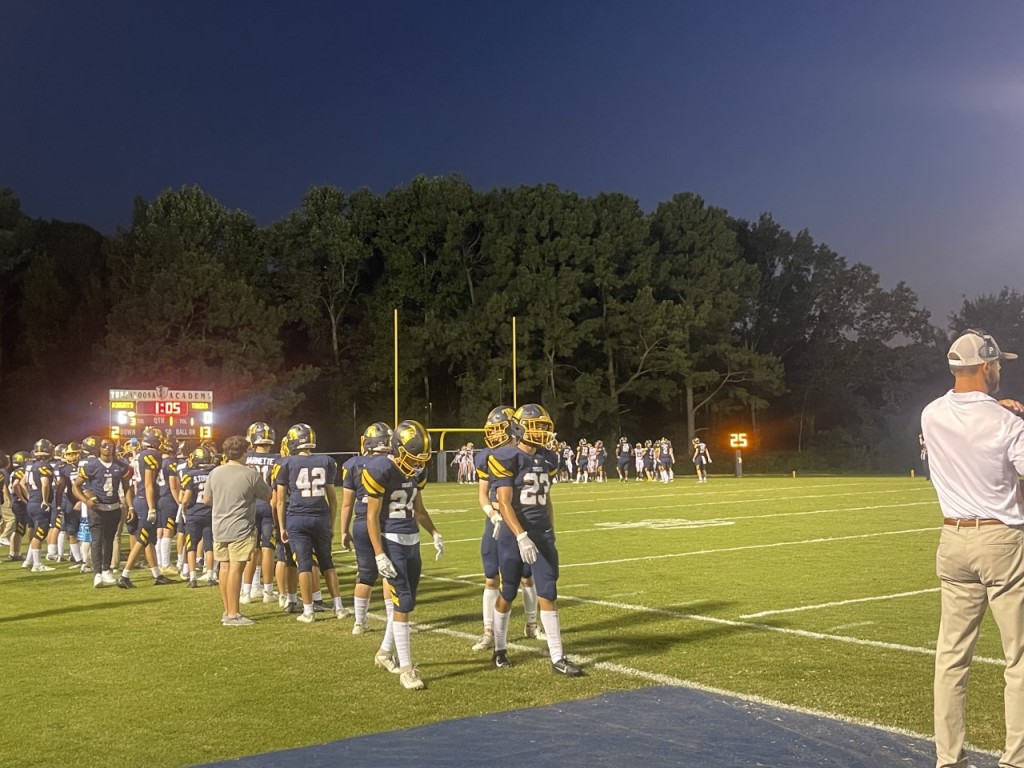 Festive energy was in the air on the night when the Tuscaloosa Academy Knights crowned their homecoming queen Ellen Sadler, and the football team’s performance gave them even more reason to celebrate.

The Knights were able to tame the Tigers in the first half putting up three unanswered touchdowns. A pair of powerful runs from Sherabiah Jones put the Knights up 13-0. Luke Kilgore proved to be a play maker for Tuscaloosa Academy. He followed up a long punt return with a touchdown catch on a pass from Preston Lancaster to put his team up 19-0 and complete their first half shutout.

The Tigers roared back outscoring the Knights 16-6 in the second half, but it would not be enough to overcome their first half deficit.

Tuscaloosa Academy moves 2-2 on the season and will face Lamar County next week.

Greene county is now 2-2 and will face Winston County next week.

Hillcrest takes down Hueytown for the first time since 2013 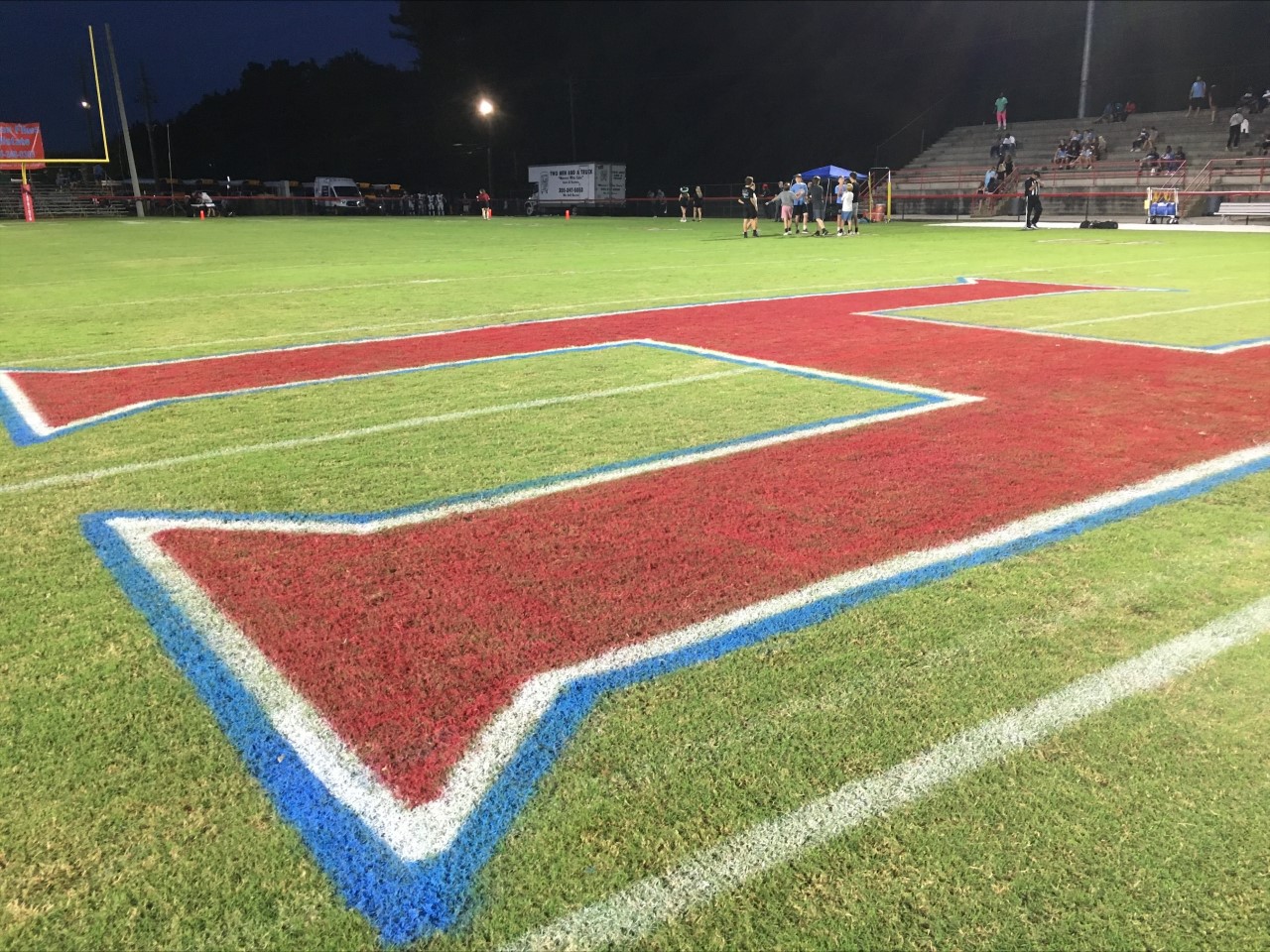 For the first time in nine years, the Hillcrest Patriots defeated the Hueytown Golden Gophers.

In an absolute shootout, Southern Miss commit, Ethan Crawford, led his team to a 54-44 win.

The Patriots came out on fire, scoring on the first possession thanks to a 19-yard touchdown pass from Crawford to Bryson Kimbrough.

After forcing a Golden Gopher punt, Hillcrest running back, Ja’marian Johnson found the endzone on a 38-yard run. Giving the Patriots a 13-0 lead in the first quarter.

Hueytown would not lay down though, utilizing running back Jakhael Rowser and 2021 Alabama Gatorade Player of the Year, Earl Woods, the Gophers got on the board for the first time of the night thanks to a quarterback sneak on the goal line.

The Gophers capitalized on a Hillcrest fumble with a 9-yard touchdown from Elijah Hudson, giving them their first lead of the night at 14-13.

At the half, the Patriots were leading 28-22 thanks to an offensive showcase by both teams.

The second half began with a muffed kickoff by Hueytown. Hillcrest took advantage of the opportunity with Crawford sneaking his way in for a touchdown, stretching the Patriot lead to 34-22

Hueytown tried to claw their way back into the game, but the Hillcrest offense was too much to overcome.

On the final possession, Woods intercepted by Crawford, sealing the victory for the Patriots.

Crawford finished his night completing 10-of-16 passes for 177 yards and four touchdowns with one interception.

Woods completed 9-of-21 passes for 160 yards and one touchdown along with one interception.

Most of his damage came from the ground, as he ran for 206 yards and four touchdowns.

Hillcrest hopes to remain undefeated as they play the Brookwood Panthers at home on Friday. Meanwhile, Hueytown looks to turn things around when they play the Bessemer City Tigers.

Outside The Huddle: Radio Dream Team

The Battle for No. 1 as Class 4A Region 5 heats up