ACA Celebrates Homecoming With A Dominant Win Over Hale County

Patriots Have Won Four Games In A Row 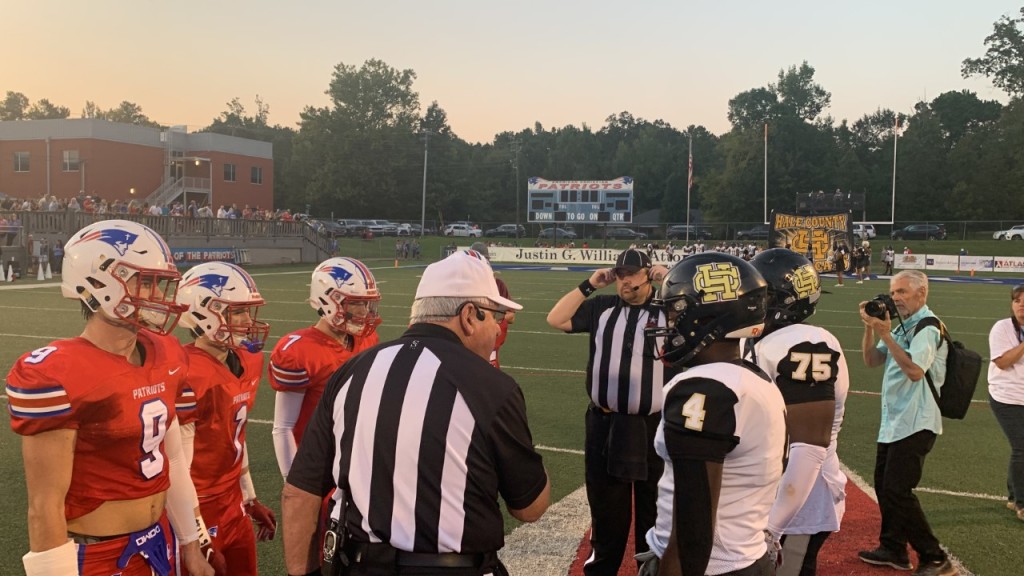 ACA scored the first 41 points of the game in a dominant 41-26 win over Hale County.

On the first play from scrimmage, Hale County quarterback Antwain Zinnerman mishandles the snap and American Christian Academy’s Cooper Dempsey recovers the ball for the Patriots.

American Christian Academy would capitalize on the great field position. Quarterback Carson Sute finds tight end Chance Henderson in the endzone, and the Patriots had an early 7-0 lead.

On Hale County’s second possession, ACA’s defense made sure the Wildcats would not get on track American Christian Academy’s Cooper Dempsey gets a sack to force a Hale County punt.

Hale County seemed primed to build some momentum late in the first quarter. ACA was threatening to score another touchdown, but the Wildcats Cameron Edwards delivered a huge hit that resulted in a Tristian Morriss  interception for the Hale County turnover.

The Wildcats offense could not get anything going, and had to punt it back to the Patriots. 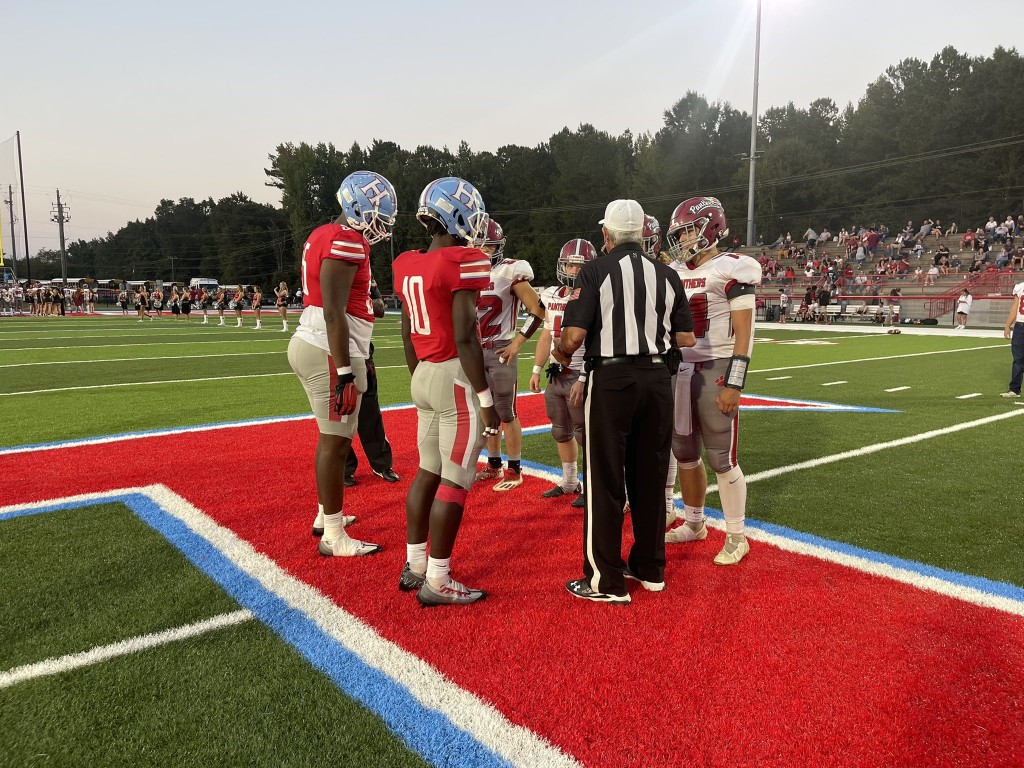 Hillcrest found points on offense and defense in the first quarter to remove any doubt in a 44-0 win over Brookwood.

Brookwood received the ball to open the game but on the Panthers first play, Hillcrest defensive back Tyre Jackson intercepted the pass from Panthers quarterback Kobie Humphries.

Following the turnover, Hillcrest’s offense found its groove. Running back Jayshon Land scored on a 11-yard run. The extra point gave the Patriots an early 7-0 lead.

On its next possession, Hillcrest running back Jamarian Johnson broke free on an 80-yard touchdown run, and the score was 14-0 Hillcrest.

Following another Brookwood turnover, Hillcrest quarterback Ethan Crawford fired a 20-yard touchdown pass to Jameson Farley to give the Patriots a 21-0 lead.

With a little more than a minute remaining in the first quarter, Hillcrest tackled Brookwood quarterback Jacob Rowell in the Panthers own endzone for a safety and a 23-0 lead.

Warriors Improve To 3-0 In Region Play 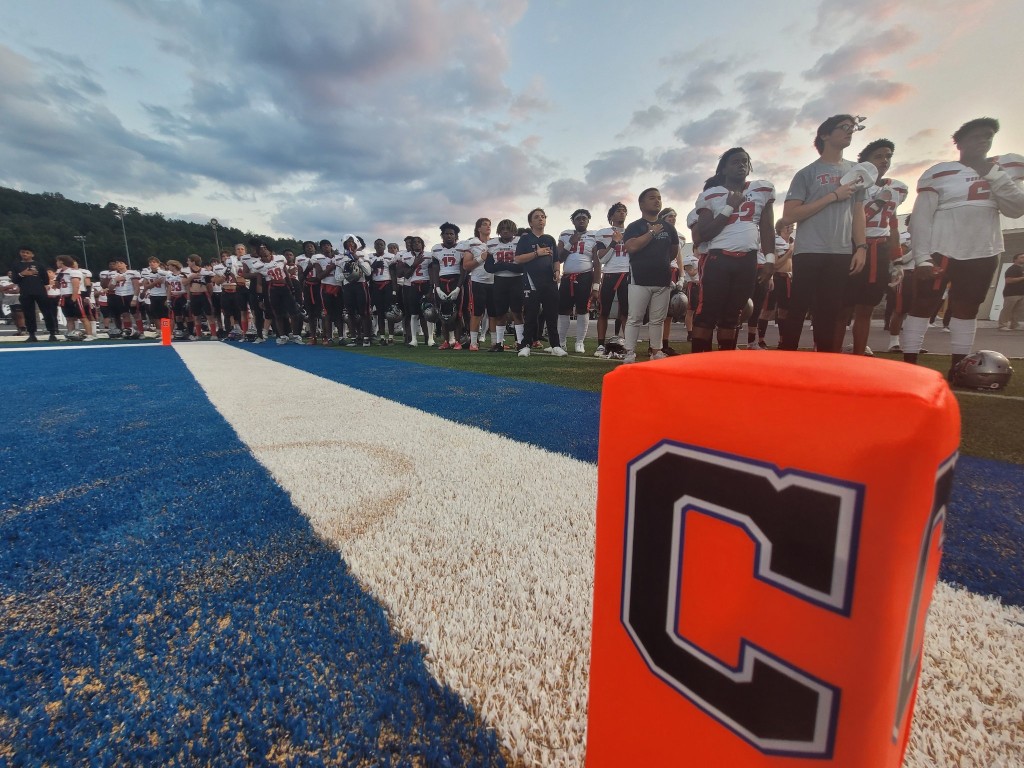 To borrow a cliche phrase, Thompson running back A.J. Green has the “scoring-touch”.

Green scored four touchdowns, the first four scores of the game for the Warriors, in a 48-3 win over Chelsea. Green now has six touchdowns in the past two games.

Chelsea opened the game on an impressive 14-play drive that lasted seven minutes, but the Hornets had to settle for a short field goal for a 3-0 lead.

Thompson answered in just two plays. On the Warriors second offensive snap, Green burst up the middle and broke free for a 63-yard touchdown run.

Chelsea’s offense went back to work and picked up where it left off on the first drive. The Hornets drove 42 yards on nine plays on its second possession. But on a third down, Thompson linebacker Caleb Ballard intercepted Chelsea quarterback Carter Dotson.

Green and the Warriors offense took over at midfield and put together another touchdown drive. Green finished this one off with a five-yard touchdown run and a 14-3 lead.

Green would find the endzone again late in the first half. With 32 seconds remaining in the second quarter, he caught a screen pass from Thompson quarterback Trent Seaborn, and managed to turn what looked to be a short gain into a 32-yard touchdown. Thompson led 21-3 at halftime.

Green scored his final touchdown on Thompson’s first possession of the second half.

Greenwave offense averaging 52 points a game in past three contests 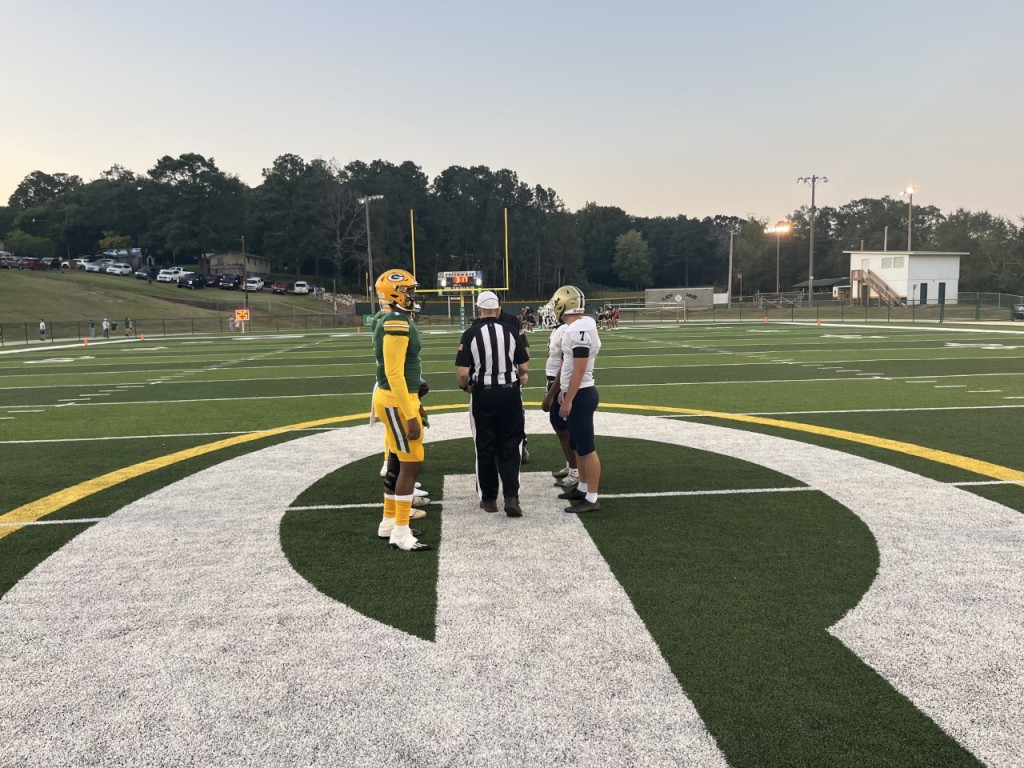 The Gordo Greenwave walked into homecoming night on a high note and huge confidence entering their matchup against the Tarrant Wildcats, and left it all on the turf in a 49-0 win.

Gordo got off to the best start they could have envisioned, with the first play from scrimmage on offense going the distance for a touchdown for the game’s first points. The defense kept up their end of the bargain making it a nightmare for the Wilcats’s offense by getting in the backfield and forcing more than a handful of stalled drives.

Gordo’s Quarterback Brax Garrison kept the points rolling as the offense scored in less than five plays on every drive in the first half with the help of his big arm and elusive ability. Garrison managed to sling a few touchdowns, and break the pocket for a rumbling run for over 40 yards to the end zone helping Gordo to a 29-point first quarter.

Tarrant managed to spark a little offense in the second quarter, but to no avail as the defensive pressure continued to stiffen on the Wildcats and force a couple fumbles. The game plan for the wildcats did them no favor as they failed to complete a single pass in the first half.

Gordo’s Rayshawn Williams quickly became the star of the show scoring 4 times all in the first half including a bludgeoning 91-yard touchdown run to extend the Greenwave lead, and make sure he gets his cardio workout in for the week.

The homecoming victory was never in doubt as the Greenwave cruised to a 49-0 demolition over the Wildcats. Gordo continues their astounding play with their third win in the region as they go on the road next week in a matchup against Pickens County. 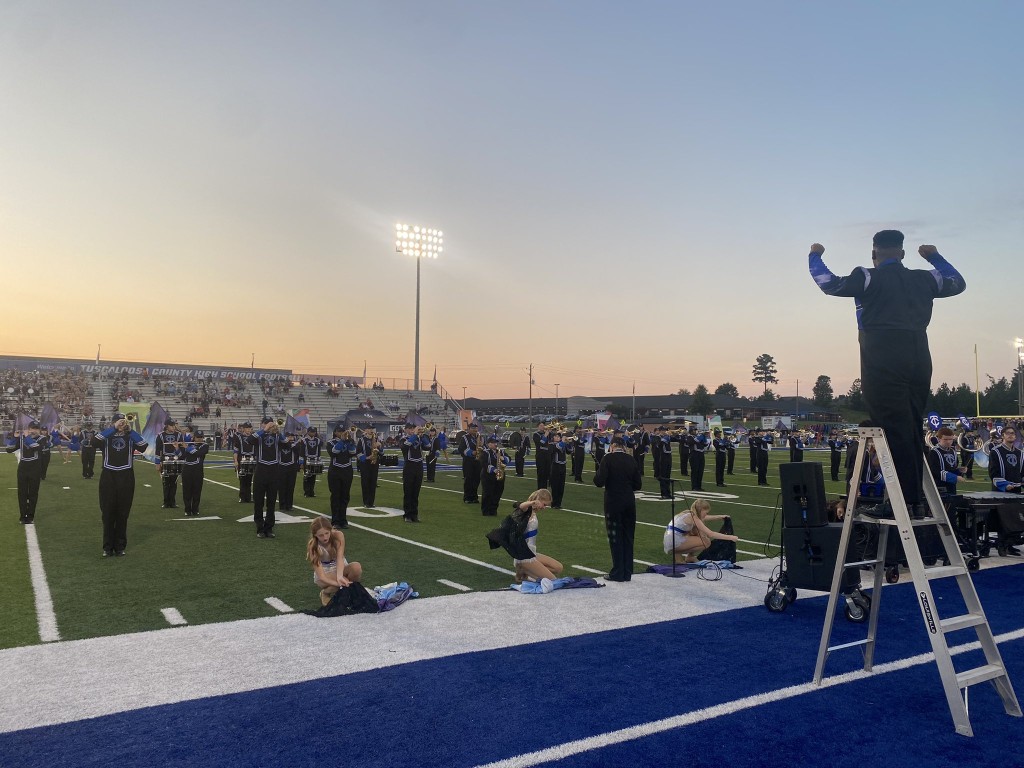 Although Riley’s last touchdown is the one that will create the most ‘buzz’, his first touchdown covered the most ground. He scored on a 70-yard touchdown on the third offensive play of the game.

Despite the fast start, Tuscaloosa County trailed 17-6 at halftime, and at one point of the fourth quarter Oak Mountain had a 31-20 lead.

The Wildcats scored two touchdowns in the final eight minutes, and Riley found the endzone on both scores.

The first one came with eight minutes. Riley scored on a one yard touchdown run, and Tuscaloosa County was successful on the two-point conversion to cut Oak Mountain’s lead to 31-28. 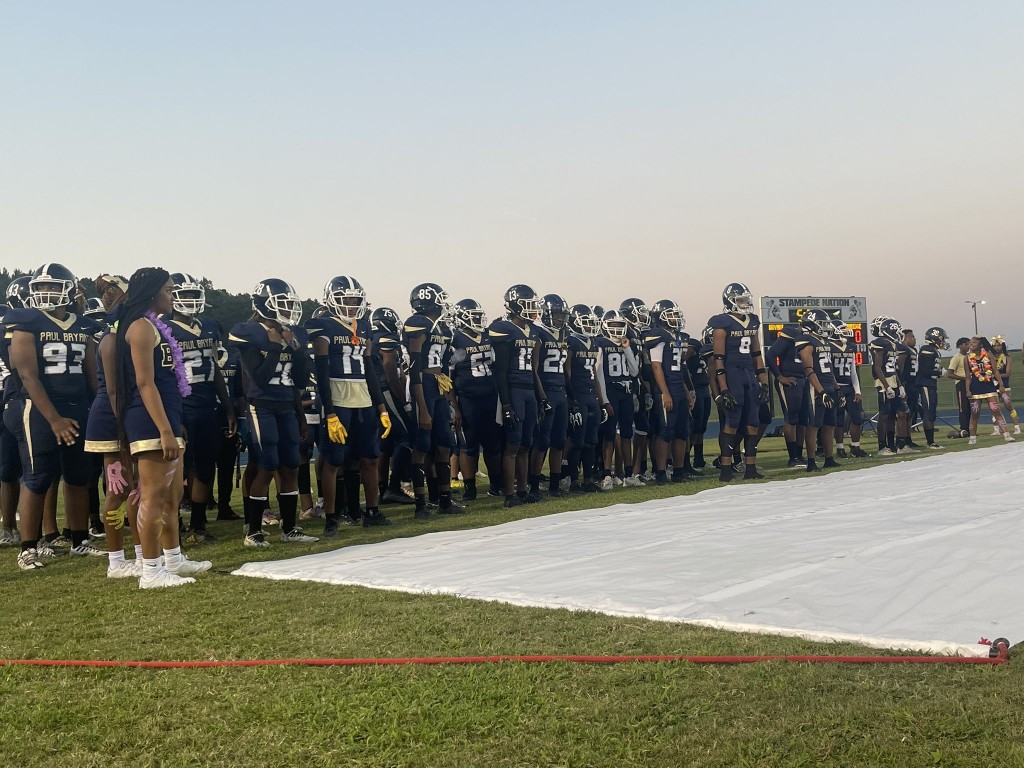 The Northridge Jaguars were too fast to catch on Friday night, in a 41-6 road win at Paul W. Bryant.

Five of Northridge’s six touchdowns came on running plays. The Jags Toryion Spears and Kollyn Shellnut each had two rushing touchdowns, just in the first half.

It has been a challenging start to the season for Paul W. Bryant, which falls to 0-5. Friday night was the Stampede’s home opener. Bryant will now play five consecutive home games before finishing the regular season at Bessemer City.

Haleyville Roars Back In 2nd Half To Beat Northside

The Haleyville Lions rolled into Northport Friday night and handed the Northside Rams an upset loss 35-27.

The first half was mostly defense dominated but it was partially a story of what could have been as Rams recievers dropped several deep would-be touchdown passes from quarterback Brayden Green.

Not to be outdone Haleyville marched the field on their first offensive drive only to fumble on a botched handoff in the redzone on what was their only real scoring opportunity of the first half.

Green would eventually get the Rams into the endzone thanks to his Herculean efforts to evade the Lions pass rush and complete Money Manziel type passes before calling his own name on a keeper to make the score 7-0 Rams where it would remain until half-time.

The second half was like a completely different ballgame.

The Rams and Lions would combine for six total touchdowns in the third quarter alone ballooning the score to 28-21 at the end of the quarter, advantage Lions.

After starting the fourth quarter by intercepting Lions quarterback Matthew Coleman, the Rams would score the potentially tying touchdown on another quarterback keeper from Green, but the Rams kicker missed the extra point leaving the score 28-27.

After forcing a punt, the Rams would have an opportunity to take the lead with little time remaining, but a Brayden Green shot to the endzone would be intercepted by Haleyville’s Hayden Gilbert.

Coleman would break off a 66-yard touchdown run on the ensuing possession to cushion the Lions lead to 35-27.

The Rams would try for the miracle Hail Mary but no dice. 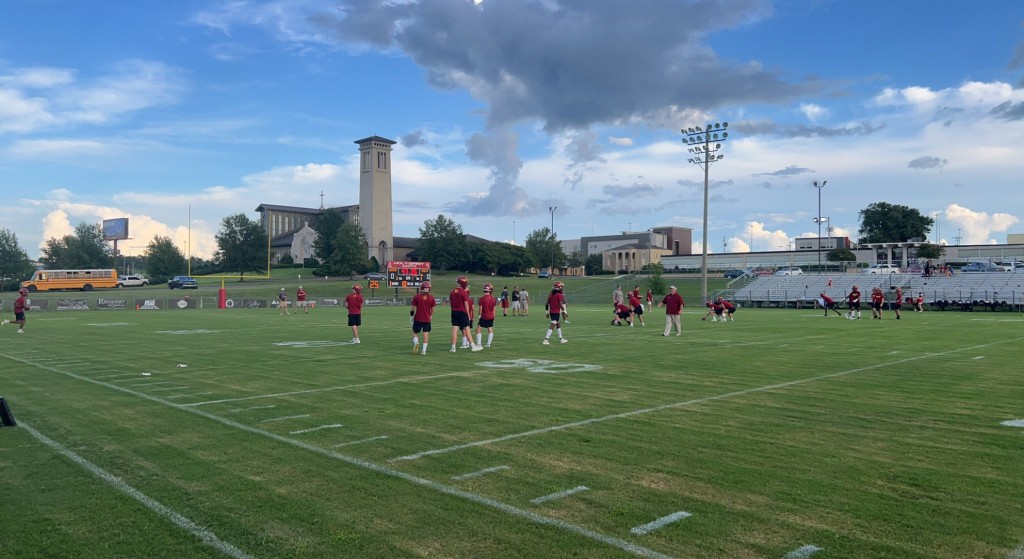 Lynn had too much fire-power for Holy Spirit, as the Bears roll to a 49-13 win over the Saints.

Holy Spirit showed its offensive fire-power. Saints running back Colby Phillips lined up at quarterback in the Wildcat Formation, and broke free on a 71-yard touchdown run. The play cut Lynn’s lead to 14-7

The Saints head coach Bobby Snyder must have had enough of being down 14-0. On the next drive the Saints running back Colby Phillips took off and ran a 71-yard touchdown from “The Wildcat.”

Whatever momentum that the Saints had, it quickly dissipated. The Bears responded with a three-play 80-yard drive. Kelly and Tittle had back-to-back long runs, before Tittle finished the drive with a 44-yard touchdown pass to Logan Madison.

Lynn extended its lead with two more touchdowns before halftime. Tittle found tight end Jacob Tidwell for one touchdown pass, and running back Benjamin Kelly for the other.

Tittle and the Bear’s kept things rolling in the second half with Tittle throwing two more touchdown passes. He finished the game with five total touchdowns.

The fourth quarter was uneventful compared to the last three with only one touchdown scored. On the final drive, Holy Spirit quarterback Kalen Oswalt had an 8-yard touchdown run. 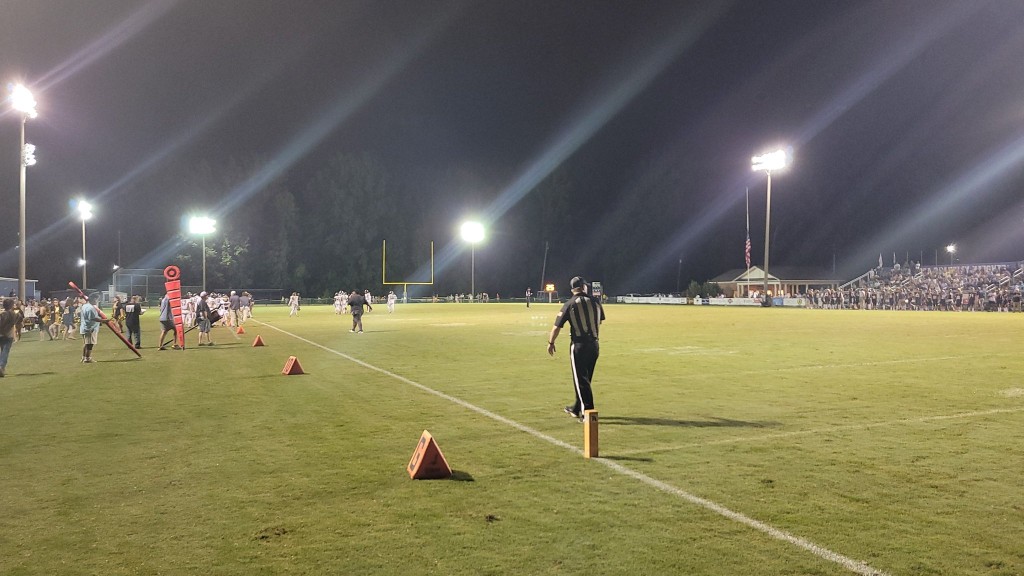 Lamar County fumbled on each of it’s first three possessions, and was unable to score in the first half.

The second half started similar to the first, except that Lamar County turned it over on an interception instead of a fumble. That led to another Lancaster touchdown pass for the Knights, which extended the lead to 21-0.

Lancaster finished with five touchdown passes in the win. 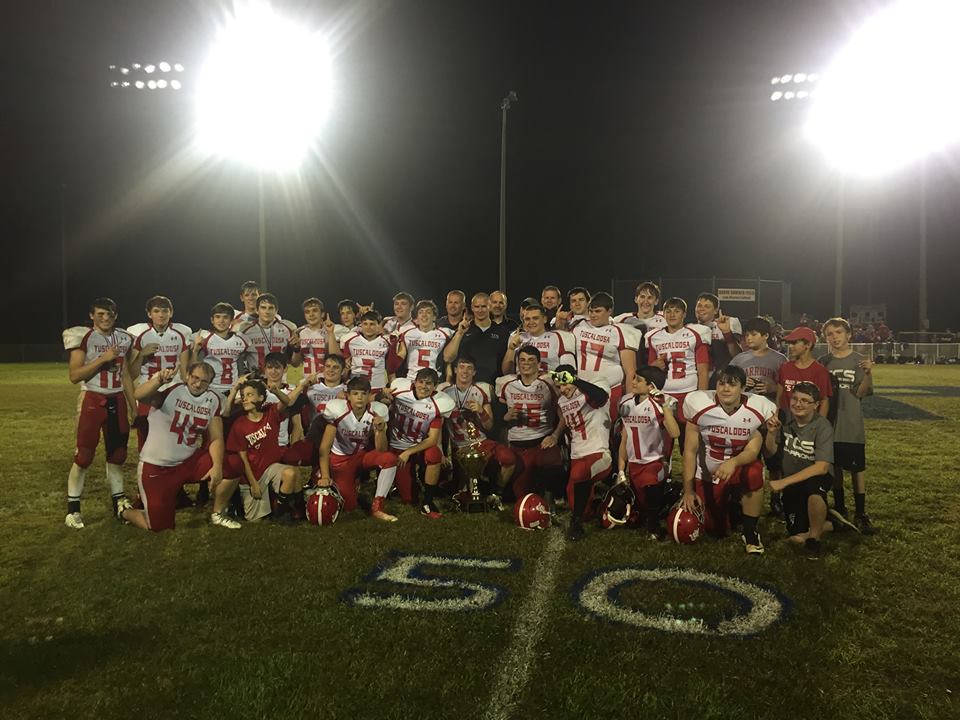 Jacksonville Christian’s dynamic duo of quarterback Noah Lee and receiver Travis Barnhill was the difference in the Thunder’s 40-34 win over Tuscaloosa Christian.

Lee found Barnhill for a 67-yard touchdown pass for the go-ahead score with one minute remaining in the game.

It was Lee and Barnhill’s second long touchdown of the second half. They teamed up for a 55-yard touchdown in the third quarter.

Tuscaloosa Christian got off to a great start to begin the second half. The Warriors offense got the ball first, and quarterback Luke Jones led a touchdown drive. Jones scored on a six-yard run, and Tuscaloosa Christian converted the two-point conversion for a 20-12 lead.

All the highlights — plus scores, cheerleaders, and ‘Band of the Week’.

Outside The Huddle: Radio Dream Team

The Battle for No. 1 as Class 4A Region 5 heats up