The Fayette County Tigers suffered their first loss of the season at the hands of the Gordo Green Wave Thursday night 35-0.

After forcing a Green Wave punt on the game’s first drive, the Tigers would drive 61 yards to the Gordo 19-yard line before the Green Wave defense would stiffen and ultimately force a turnover on downs.

On the ensuing drive, the Tigers would struggle to stop Gordo’s rushing attack, and eventually Gordo’s quarterback Brax Garrison would carry it in on a one-yard QB-keeper on the first play of the second quarter making the score 7-0 Green Wave.

The defense dominated the next few drives as the Tigers were held to another turnover on downs before intercepting an errant pass from Garrison on the ensuing Green Wave possession.

But Gordo would return the favor when Max Stephenson jumped a Blake Johnson pass and took it all the way down to the Fayette County one-yard line and Garrison would finish the job with another QB run putting Gordo up 14-0 going into the half.

The second half was the same as the Green Wave would continue to stymie the Tigers’ offense while adding 21 more points to the scoreboard.

Gordo improves to 7-1 on the season and will travel to Oakman next week to play the Wildcats.

With the loss, the Tigers fall to 6-1 on the season but look to get back in the win column when they host the Winfield Patriots in their next matchup.

The Holy Spirit Saints get blown out by Pickens Co. Tornadoes 60 to nothing.

First play from scrimmage, running back Elijah Merriweather takes it all the way to the house down the left sideline for a touchdown.

Pickens County looked to grow their lead with quarterback Demarkis Giles throwing up a jump ball to his wide receiver  Zavian Hood who would rise up and manhandle the ball away from a Holy Spirit defensive back.

Holy Spirit just could not get anything going on offense with the Tornadoes defense swarming to every running. The Tornadoes lived in the backfield all night and allowed next to no yards for Holy Spirit.

Saints try to get the passing game going by throwing up a prayer that would be intercepted and taken to the house by Santonio Jones for another Pickens touchdown.

This game is a huge momentum booster for the Tornadoes as they pitch a shutout in Tuscaloosa. 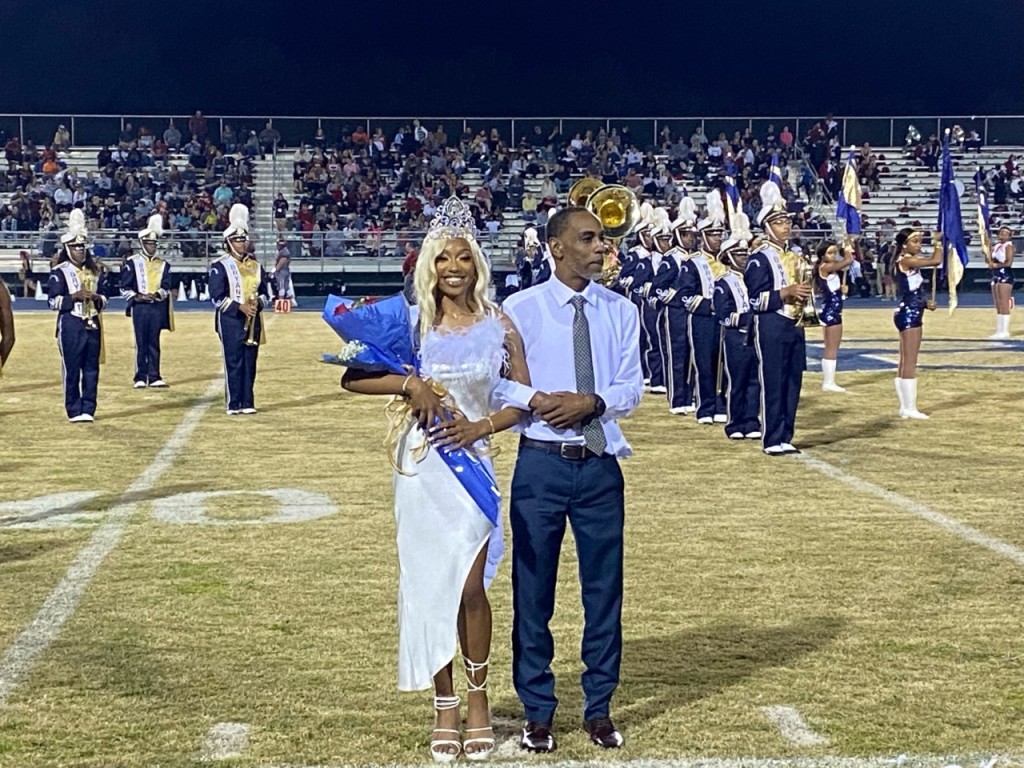 Brookwood High School (4-2) visited winless Paul Bryant High School as the Stampede celebrated Homecoming Friday. Brookwood was down 10-0 coming out of halftime and needed to score. They would hand the ball off to Running Back CJ Cummins who would run it up the middle for six points. Bryant would still hold a 10-6 lead after a failed point-after attempt.

Bryant tried to bounce back after the Brookwood touchdown but Quarterback Edwin Merriweather would have trouble with the snap and fumble. Brookwood Corner Back Max Williams would recover the ball at midfield. Bryant needing to regain momentum, they would hand the ball off to Running Back Tabious Vanhorn who rips off a huge run to put the Stampede in the red zone.

Later that drive, Bryant capitalized on the big play when they hand the ball off to Running Back Kevin Brown who ran it in for the touchdown. Bryant won its first win of the season on Homecoming, 23-18 over Brookwood.

Next up for the Paul Bryant Stampede will be another tough home test against the Hillcrest Patriots. Meanwhile, for the Brookwood Panthers, they look to bounce back against the McAdory Yellowjackets at home.

The Hillcrest Patriots took on the Bessemer City Purple Tigers Friday night and came away with a 47-16 win.

The Patriots outclassed the Purple Tigers for the entire first half. The first score of the game came on a short pass from Patriots quarterback Ethan Crawford to running back Jamarion Johnson who took it 14 yards for a touchdown.

Bessemer City would attempt to respond on their next drive but would fumble and give possession back to Hillcrest. The turnover gave the Patriots a strong field position and set up Ethan Crawford for his second passing touchdown of the game this time connecting with his tight end Jackson Henderson. To close the quarter, Jamarion Johnson would take a handoff 39 yards to give the Patriots a 20-0 lead heading into the second quarter.

The first score of the second quarter came on an acrobatic catch in the corner of the endzone from Decorrian Thompson. Jamarion Johnson got into the endzone on a short run up the middle for his third touchdown of the game. The Patriots tried to take their foot off the gas by putting in their backup quarterback Bryson Kimbrough, but he would add another touchdown before halftime on a pass to Jameson Farley.

The Purple Tigers would outscore the Patriots 16-7 in the second half, but the Patriots maintained control. Hillcrest remains undefeated (8-0) while Bessemer City remains winless (0-8).

The Northside Rams (6-1, 4-1) faced off against the visiting Cordova Blue Devils (2-5, 1-4) in a game that appeared to be a one-sided affair until the start of the second half.

The Blue Devils offense was the first to take the field and proceeded to get on the scoreboard after a quick three-play 68-yard drive that was capped off with a 36-yard touchdown pass from quarterback Cody Headrick to his receiver Kaden Williams to put Cordova up 7-0.

The Rams kept their momentum going on their next offensive possession with another near 70-yard touchdown drive that was capped off by Green forcing himself into the endzone for a one-yard touchdown making the score 13-7.

Northside received the ball at the beginning of the second half and began working on another methodical drive, taking a lot of time out of the third quarter attempting to score once again. However, Cordova’s defense made a 4th down stop setting up their offense on the Blue Devils’ 10-yard line.

The Blue Devils got another defensive stop down by seven with 7:00 minutes left to go in the fourth. Receiver Jalen Armistad managed to haul in a 33-yard touchdown reception making the score 20-19 but the extra point attempt to tie the game was wide left after the Rams once again got pressure on Robertson. Northside managed to survive Cordova at home 20-19.

The loss eliminates Cordova from postseason contention. The Blue Devils will take on Oak Grove (3-4, 2-3) on the road next week.

Northside is now tied at the top of the 4A Region 5 pile with Dora and Haleyville as all three teams are 4-1 in region play. Northside will play Dora (4-3, 4-1) at home next week.

The Northridge Jaguars beat the Central Falcons in a 6A-R4 matchup under the Friday night lights.

The Jaguars won the game 55-0 and this led to them improving to 5-2 on the season.

The Jaguars started early as they pounded the rock early and often on their first possession until running back PJ Hall scored an 8-yard touchdown.

Northridge would go on to score on their next drive, making the game 14-0 now. Kollyn Shellnut would get the ball on the sweep and score.

The Rams’ defense played lights out most of the game, and after a quick Falcon possession, The Rams would score again, putting them up 21-0.

The Falcons could not get their offense rolling and after another quick possession, Northridge would get the ball and QB Rowdy Christenson found his target for 54 yards, Patten Curington caught the pass and scored the touchdown.

Before the half, The Rams took a punt return to the house, Nick Sherman went 40 yards for the score. Now making it 42-0 at halftime.

The Northridge Rams will go on to play the Hueytown Golden Gophers in an interesting Region 4 matchup.

The Central Falcons fall to 1-7 on the season. They get to stay at home next week vs The Bessemer City Tigers.

Tuscaloosa Academy Knights defeated the Winston County Yellowjackets 34-8 for a 2A region five game at home.

Tuscaloosa Academy opened the first quarter with a touchdown run from Sherebiah Jones.

The Knight’s run did not stop there. Quarterback Preston Lancaster threw a short touchdown pass to Mills Powell, leading the first, 14-0.

Looking for a play, Winston County decided to fake a punt as Eli Edgil ran the ball to the 1-yard line, leading them to their first touchdown of the half.

Before halftime, Tuscaloosa Academy’s Lancaster found Luke Kilgore for an easy touchdown run, 21-8. The Knights kept the lead throughout the game, holding the Yellowjackets to only eight points.

Tuscaloosa Academy takes the win making them 5-2 for the season. The Knights will travel to Sulligent to take on the Blue Devils next Friday.

Winston County moves to 5-2 for the season and will face Aliceville at home next Friday. 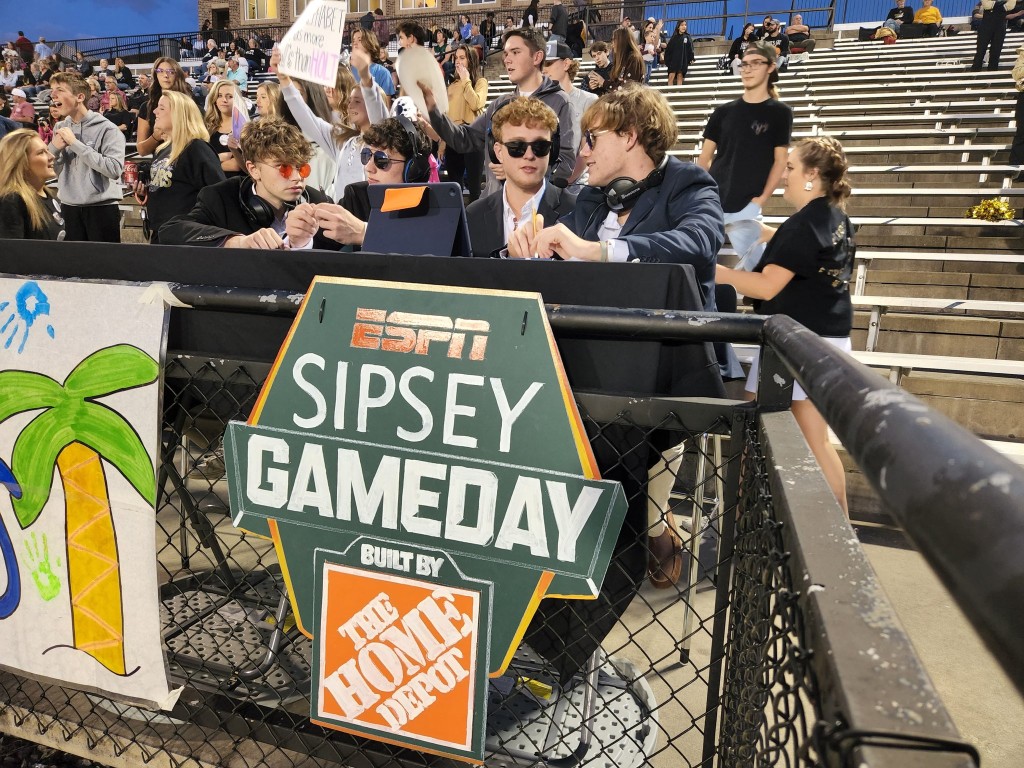 Sipsey Valley did all of its scoring in the first half, scoring 37 points before halftime in a 37-6 win over Holt.

It’s the Bear’s third consecutive win, something the program has not done since 2018. The longest winning streak in program history is four in a row, which happened back in 2012.

The defense got the scoring started for Sipsey Valley, with a safety midway through the first quarter.

Then the Bears’ offense started ‘clicking’. Sipsey Valley quarterback L.J. Cormier connected with Wyatt Bailey for the first touchdown of the game.

Holt put together its best drive of the game in the second quarter. The Ironmen’s Michael Ramsey ripped off a 20-yard run to set Holt up with a first down at the Sipsey Valley 12-yard line. But a few plays later, Ironmen quarterback Kaden Abrams threw an interception in the endzone to Sipsey Valley’s Bailey – the same player who scored the Bears’ first touchdown.

Sipsey Valley added to its growing momentum when Cormier connected with Cameron Hinton on an 89-yard touchdown pass.

Tuscaloosa County won the turnover battle but lost the game to Hoover, 31-13.

Hoover scored a touchdown on its first possession, but Tuscaloosa County’s defense didn’t allow any more points in the first half. The Wildcats blocked a field goal, registered a defensive stop on 4th-and-1, and recovered a pair of Hoover fumbles.

Tuscaloosa County kicker Isaac Rodriguez kicked a pair of first half field goals, to cut Hoover’s lead to 7-6 at halftime.

Hoover running back LaMarion McCammon took over after halftime. McCammon scored three touchdowns in the second half. He finished the game with 247 yards rushing.

Thompson’s defense was opportunistic, to say the least.

The Warriors had three defensive scores, with two of them coming in the first quarter in a 51-0 win over Oak Mountain on Thursday night.

It’s the most points Thompson has scored in a game this season, as well as the first time it has held an opponent scoreless.

The Warriors’ defense did not waste any time. On Oak Mountain’s second offensive snap, Thompson linebacker Seth Hampton intercepted a pass from Eagles quarterback William O’Dell and returned it 20 yards for the first touchdown of the game.

Following a Thompson defensive stop, the Warriors’ offense scored on a one-yard touchdown run by running back A.J. Green.

Then the Thompson defense found the endzone again. Warriors defensive back Peyton Lewis jumped in from of O’Dell’s pass another interception, and Lewis returned the ‘pick’ 20 yards for another defensive touchdown.

The Warriors added a third defensive score in the third quarter. Defensive back Anquon Fegans intercepted O’Dell’s pass on the right sideline and returned it back 50 yards for a touchdown.