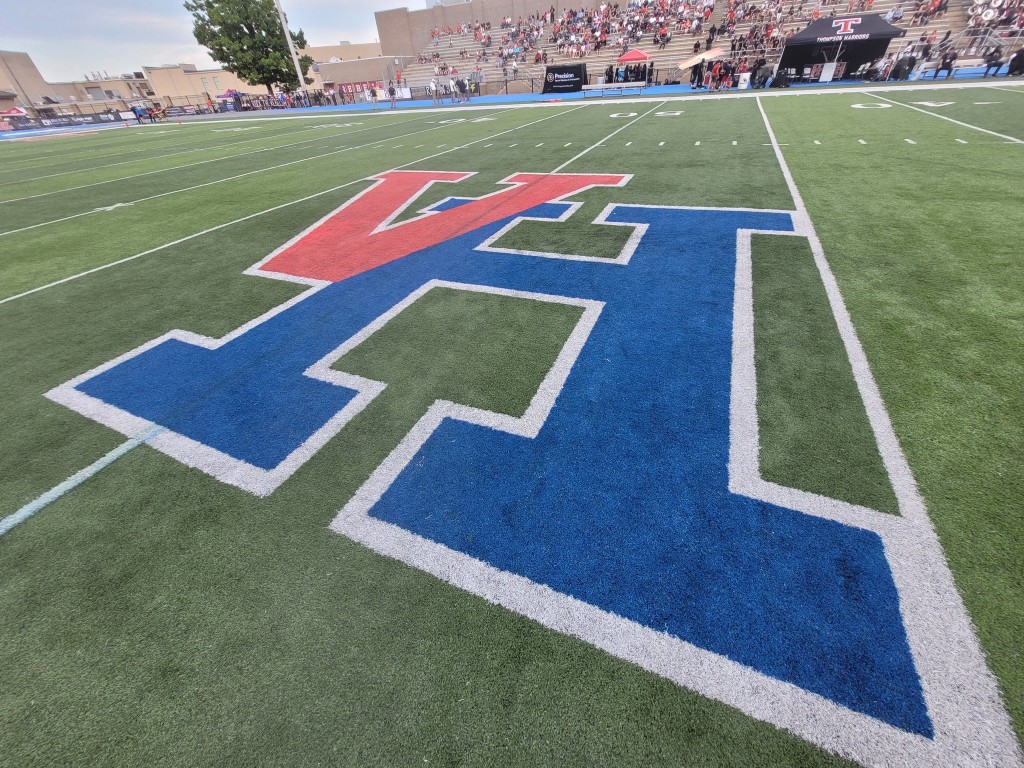 The Rebels quarterback had a hand in six total touchdowns in Vestavia Hills’ 59-18 win, which secures a playoff spot for the Rebels. Based on the result of this game, Vestavia Hills edges out Tuscaloosa County for the No. 4 seed, and final playoff spot, from Class 7A Region 3.

Head finished the game with 249 yards passing and five touchdown passes. He also rushed for 112 yards and another score.

Head’s hot hand helped Vestavia Hills jump out to a 31-0 lead early in the second quarter. The Rebels led 45-10 at halftime.

Tuscaloosa County got touchdowns from running back Kevin Riley and quarterback Braeden Smith in the loss.

The Wildcats have lost three games in a row.

Next week, Vestavia Hills (5-4, 4-3) will play a non-region road game at Helena (6-3, 3-3) before turning its attention to the Class 7A playoffs. The Rebels will travel to north Alabama to play Austin in a first-round game, which is scheduled for Friday, Nov. 4. 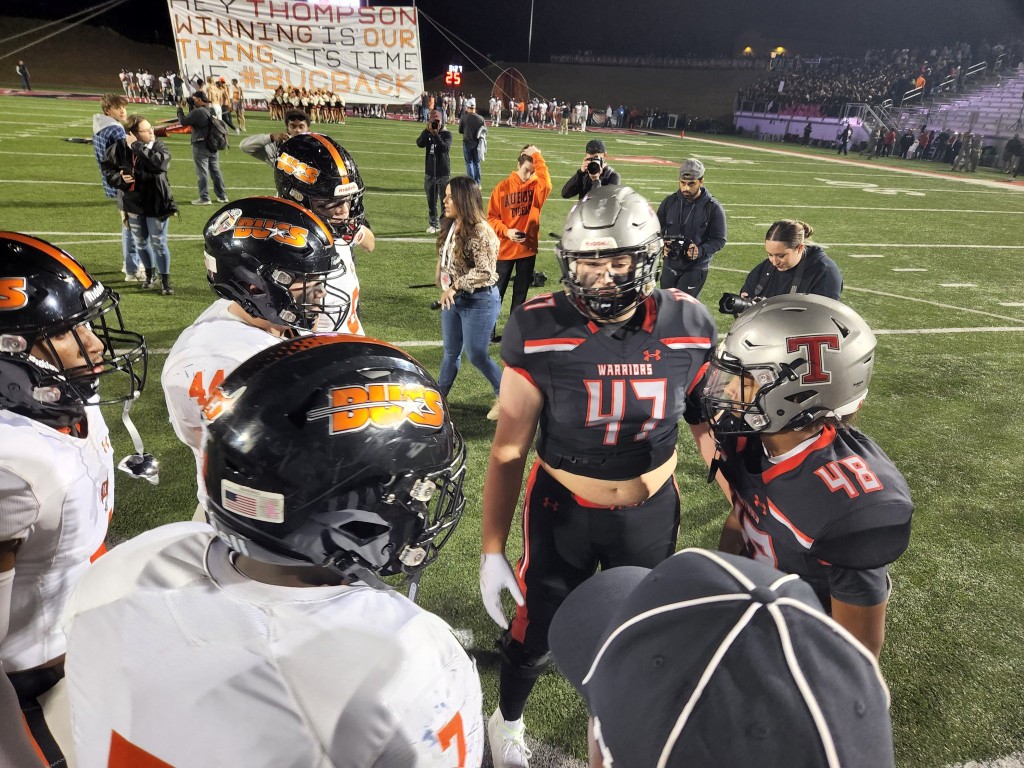 In a defense dominated battle, Hoover’s ‘D’ stood out in a 9-0 win over Thompson.

It’s the first time Thompson has been held scoreless in a game since 2016.

With the victory, Hoover earns the Class 7A, Region 3 championship, and the No. 1 seed in next month’s AHSAA playoffs.

The only touchdown of the game came on Hoover’s first possession. The Bucs drove 54 yards in 10 plays with LaMarion McCammon finishing the drive with a 1-yard touchdown run. The extra point made it 7-0 Hoover.

That remained the score through the first three quarters, as Thompson failed to score on three different trips inside the red zone.

Thompson’s best drive of the first half ended with an interception in the endzone by Hoover’s Jay Avery.

Near the end of the first half, Thompson threatened to score again before a sack moved the Warriors out of field goal range.

The Warriors biggest play of the game came early in the second half when it blocked a Hoover punt to give the offense a first-and-goal at the 8-yard line. But after failing to score on three plays, Thompson’s field goal attempt hit the upright and away to the right.

Midway through the fourth quarter, Hoover sacked Thompson quarterback Zach Sims in the endzone, knocking the football out the back of the endzone for a safety and a 9-0 lead. 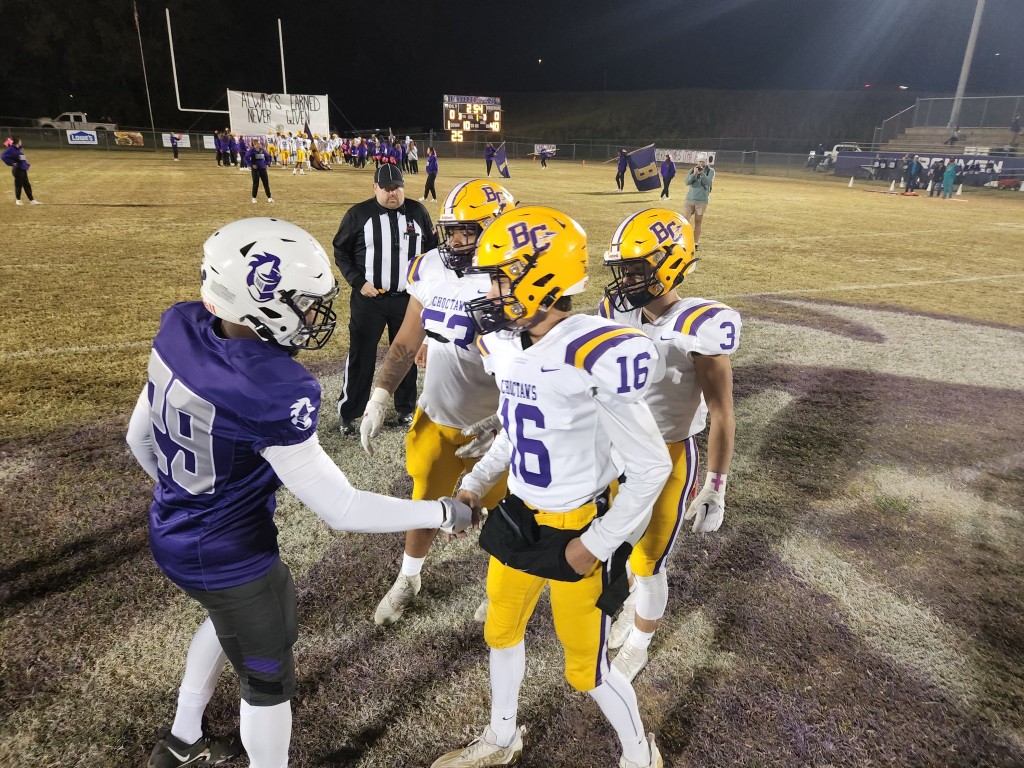 Bibb County explodes for four touchdowns in the first four minutes of the second quarter on its way to a decisive 49-0 win over Holt on Thursday night.

The Choctaws scored touchdowns on seven of its first eight possessions, including a 63-yard punt return touchdown from senior Colby Collums.

On the first play of the second quarter, Bibb County running back Jaison Taylor broke free up the middle for a 26-yard touchdown run. The extra point made it 21-0 Choctaws.

Following Collums punt return score, Taylor scored his second touchdown of the game. He busted up the middle on an 8-yard touchdown run to make it 35-0 Bibb County.

Collums added his second touchdown on a 16-yard run to give the Choctaws a 42-0 lead.

The four second quarter touchdowns came within a four-minute span of the game.

Bessemer City picks up its first win of the season 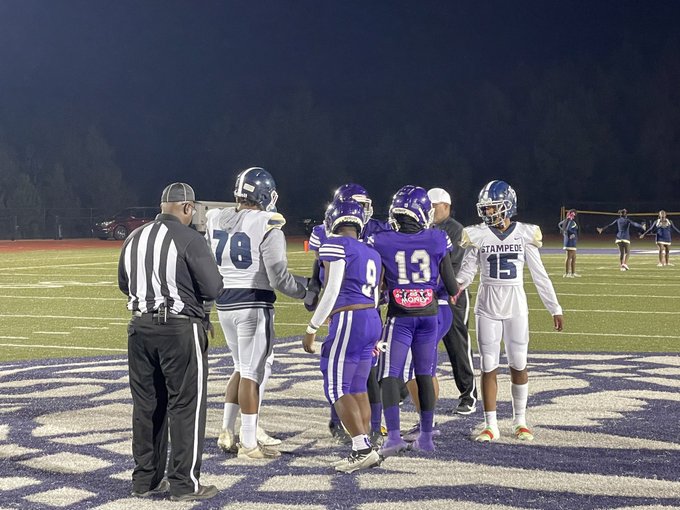 The teams traded touchdown drives to open the game. Bessemer City opened the scoring with a touchdown pass from Christopher Whittsett Jr to Jayden Gilmore. It was the first of Gilmore’s three touchdowns in the game.

Paul Bryant answered with a 40-yard touchdown run by running back Kevin Brown to tie the game.

Following another score from each team, Paul Bryant jumped out to its biggest lead when quarterback Edwin Merriweather threw a touchdown pass to Cam’Ron McCloud to make the score 20-12 in favor of the Stampede.

Paul Bryant was unable to keep up its offensive momentum. Bessemer City outscored the Stampede 40-13 over the final two and a half quarters.

Bessemer City (1-9, 1-6) and Paul Bryant (1-9, 1-6) are off next week, which is the final week of the regular season. Neither school will compete in the AHSAA playoffs.

West Blocton cashes in on turnovers to beat Dallas County 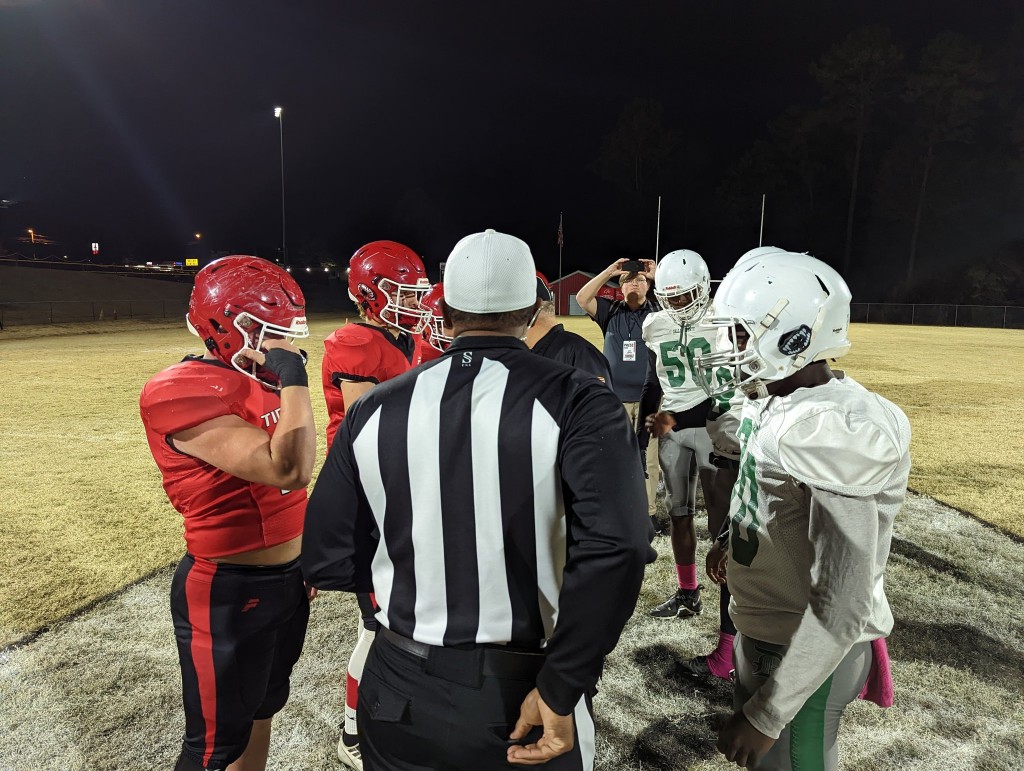 West Blocton scored touchdowns off a pair of first half interceptions to take control on its way to a 32-0 win over Dallas County.

The first interception came on the third offensive play of the game. West Blocton linebacker Seth Isbell jumped in front of the Dallas County pass and returned the turnover to the Hornets 4-yard line. West Blocton scored a touchdown on the next play to take a 7-0 lead.

Montgomery also returned the second half kickoff 65-yards for a West Blocton touchdown to give the Tigers a 26-0 lead.

West Blocton (6-4, 5-2) will have a week off to prepare for the Class 4A state playoffs. The Tigers are the No. 3 seed from Region 3 and will travel to Handley in the first round, in a game scheduled for Friday, Nov. 4.

Dallas County (1-8, 1-6) did not qualify for the postseason. The Hornets will wrap up their season next week in a home game against Southside Selma (5-4, 3-3).

Northridge takes advantage of field position in win over Brookwood 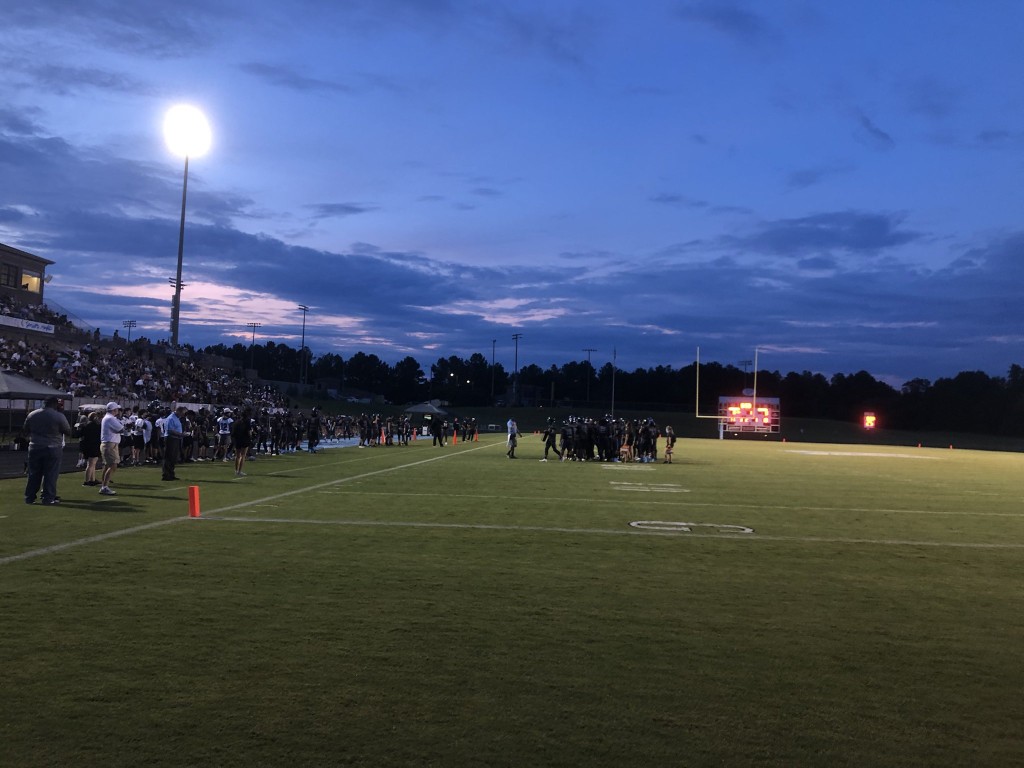 Northridge took advantage of excellent field position to get out to an early lead in a 28-14 win over Brookwood.

Both of Northridge’s first half touchdown drives began in Brookwood territory.

On the opening kickoff, Brook attempted an unsuccessful onside kick. The ball went out of bounds, which meant that the already short kick received additional penalty yardage, which gave the Jaguars out with excellent field position.

Brookwood however did make it tough to gain yards as Northridge had to convert two fourth downs on the opening drive, but the second conversion would be a 30-yard touchdown pass from Rowdey Christensen to Kollyn Shellnut.

The two defenses would force multiple punts throughout the remainder of the first quarter and the beginning of the second quarter with a few Panther turnovers in between in the form of a CJ Cummins fumble and interception by Northridge safety Taylor Halperin. Halperin took the interception down to the 10-yard line where Jaguar runningback PJ Hall would do the rest, carrying it in for the touchdown and giving the visiting Jags a 14-0 lead that they would take to halftime.

The Panthers got the ball to begin the second half but their drive would stall out and the Jaguars would take a 21-0 lead on the ensuing drive when Christensen found tight end Patton Carrington for a 39-yard score.

The Panthers would fight back shrinking the Jaguars lead to as little as seven point but ultimately would not be able to complete the comeback.

Before the game, Brookwood High School honored former student-athlete Brandon Johnson with a ceremonial key to the city. He was a part of the Ole Miss baseball team, and earlier this spring Johnson recorded the final out to clinch the Rebels College World Series Championship win over Oklahoma. Johnson graduated from BHS in 2018.

Next week, Northridge will play host to the Alma Bryant Hurricanes to close the regular season and Brookwood will be visited by Tuscaloosa County Wildcats for their season finale

Springwood (6-3) concluded its regular season with a road win over North River Christian (3-7).

The scoring got started on the first play of scrimmage when Springwood running back Cayden Cooper took off and evaded a few defenders on his way to a long touchdown run.

After the Chargers first drive stalled, the Wildcats were able to get back in the endzone again when Colt Pearson was able to return a punt for six.

Later in the first half, the Wildcats continued to find success on the ground. This time, Jon Jon Johnson found on the handoff from Ben Cooper.