WVUA-23’s recaps the first week of the AHSAA playoffs. Enjoy highlights from: 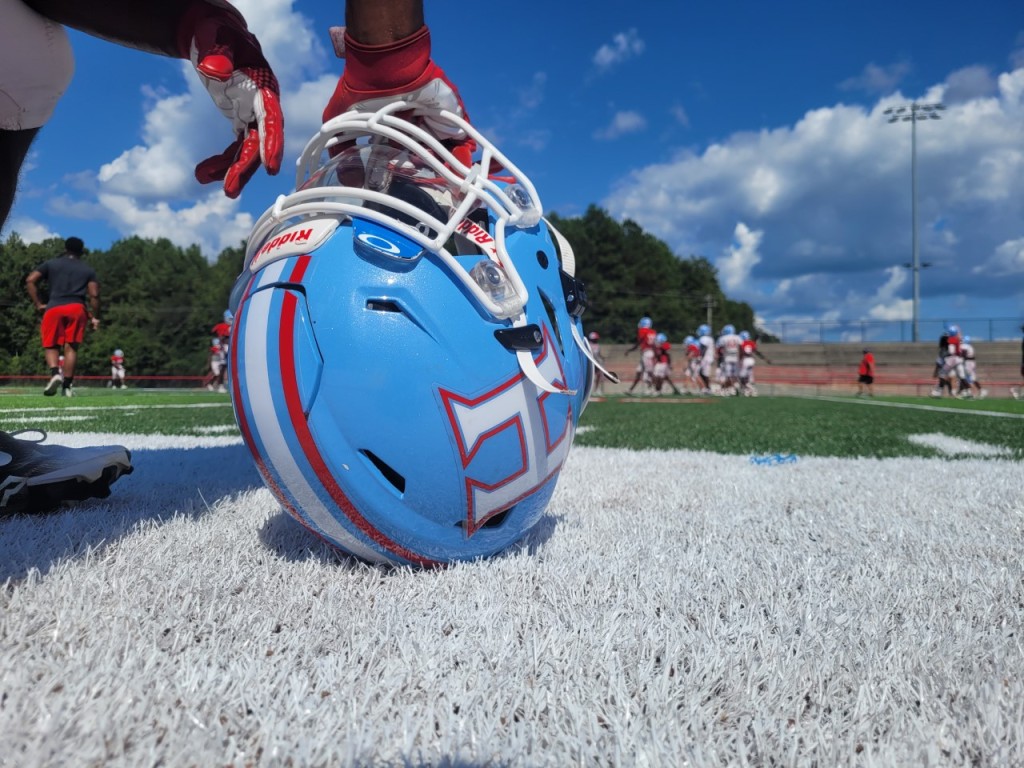 Hillcrest (11-0) won its first round playoff matchup against the Calera Eagles (4-7). The Patriots were led by Sophomore quarterback Bryson Kimbrough, who finished with 4 touchdowns.

On the first Patriot drive, Kimbrough found Decorrian Thomas for a 17-yard touchdown on his first pass attempt.

Calera would try to respond on their next possession but Preston Stokes was intercepted by Preston Clendenin and would set up the Patriots at the 40-yard line.

After a few sloppy possessions from both teams, Thomas found the endzone again, this time on the ground from 21-yards out.

Hillcrest led this game 17-0 at halftime and didn’t look back.

The Patriots will look to advance to the quarterfinals of the 6A playoffs as they host Saraland (10-1). That game is scheduled for Nov. 11th, at 7 p.m. 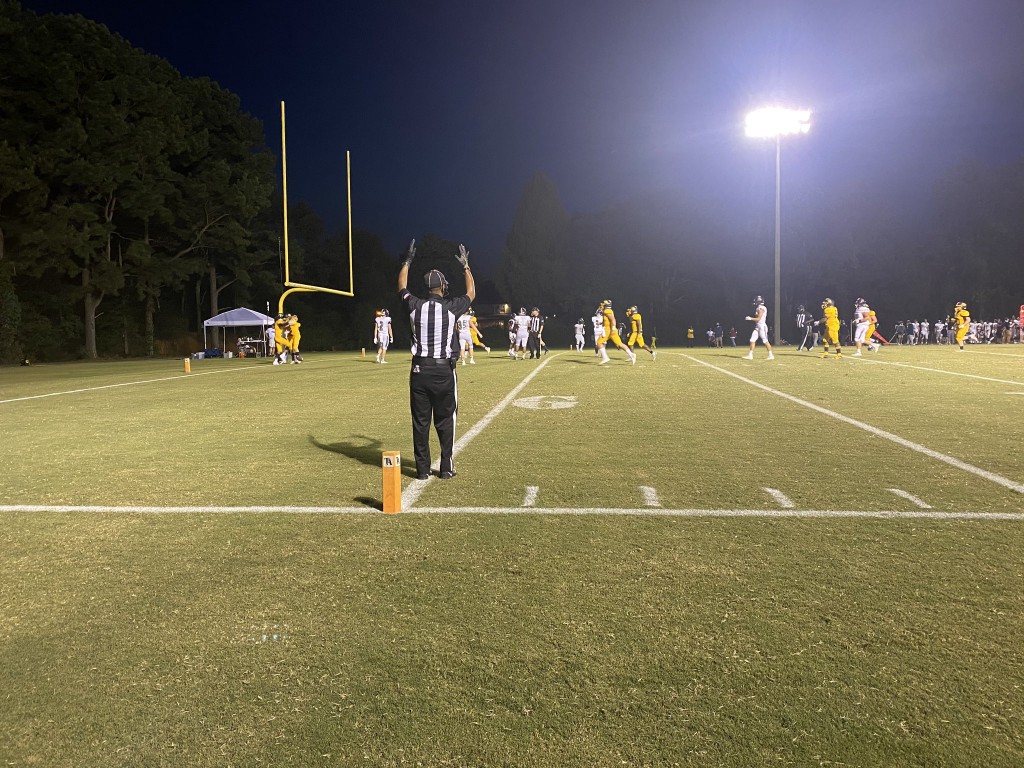 Locust Fork was first to score when Dylan Embry sent it 28-yards to Miles Watts, and he ran the ball into the endzone.

The Hornets held their lead and J.J. Boatright intercepted Preston Lancaster’s pass and took it in for a touchdown.

The Knights’ Sherebiah Jones made the Knights first Touchdown of the game with less than a minute remaining in the first quarter.

Tuscaloosa Academy fought back with a rushing touchdown from Jones, giving him his second touchdown of the night.

The Knights finally took the lead with 25 seconds left in the first half. Lancaster sent it to James Standard, giving the Knights a 1-point lead.

Lancaster sent the ball to Andrew David for another Tuscaloosa Academy touchdown with five and a half minutes left in the third quarter.

Lancaster chucked the ball 36-yards to Mills Powell to give the Knights their final touchdown.

The Knights advance to the second round of AHSAA region 2a playoffs to play the Lexington Golden Bears Nov. 11 at 7 p.m.

The Gordo Green Wave cruises in round one 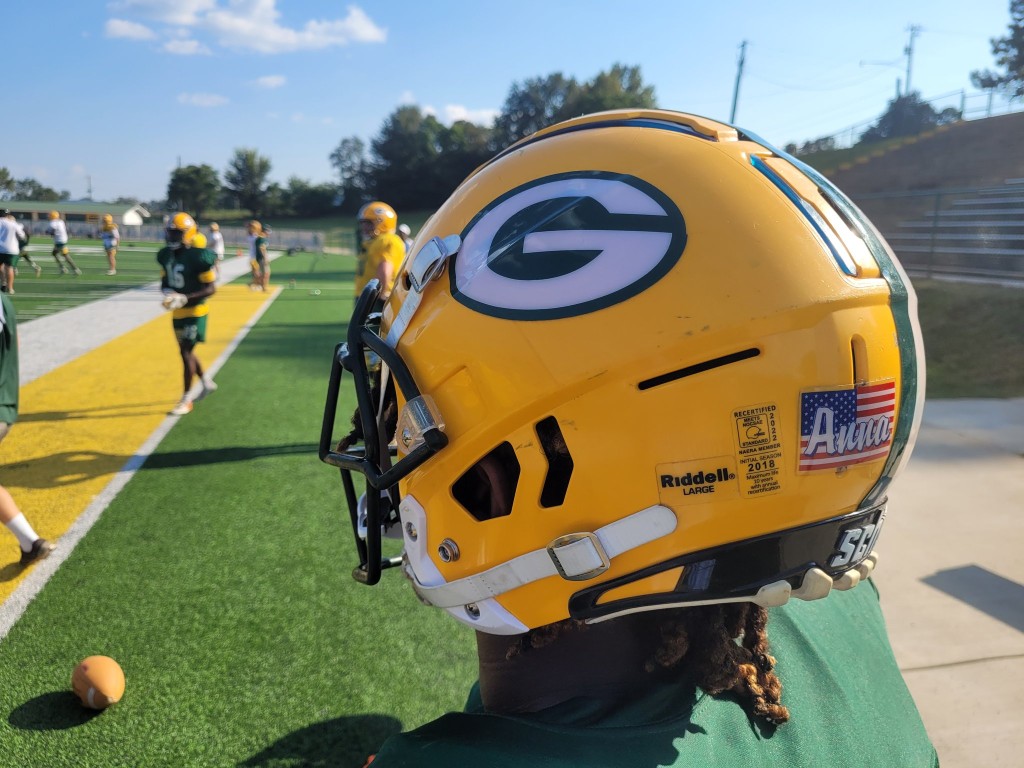 Their offense came out on fire ending their first drive with a 40-yard touchdown by Willie Fonville.

Ohatchee tried to get on the board late in the second quarter, but a flag overturned the touchdown, leading to an impressive fourth down stop by the Gordo defense.

Gordo’s defense played well all night, forcing two first-half turnovers and allowing the Indian offense to pass the 50-yard line only once.

Senior quarterback Brax Garrison had himself a game throwing for two first-half touchdowns to Ethan Wilder and Willie Fonville.

Gordo’s offense was too much for the Indians to overcome, as they win 50-6

Gordo hosts Lauderdale County next week in round two of the playoffs.

It was a high scoring game for both teams, but only one prevailed as Cornerstone Christian defeated North River Christian, 72-51 in the first-round of 2022 high school playoffs in an AISA 8-Man matchup.

Cornerstone held the lead throughout the game, starting the third quarter with a 1-yard touchdown run from Zeke Adams to make the score, 48-27.

North River Christian began their drive with a touchdown run from Graham Jones but ended up falling short of the end zone.

On their next play, Jones found his way into the end zone, making the score 33-50.

North River Christian finished, 3-8 overall in the 2022 season, while Cornerstone Christian moves to, 6-4 as they advance to the second round of the AISA 8-Man tournament.

Next week, Cornerstone Christian will host Springwood (6-3) as the Wildcats are coming off a first-round bye.

The two previously met in September as Cornerstone won the game by two, 52-50. 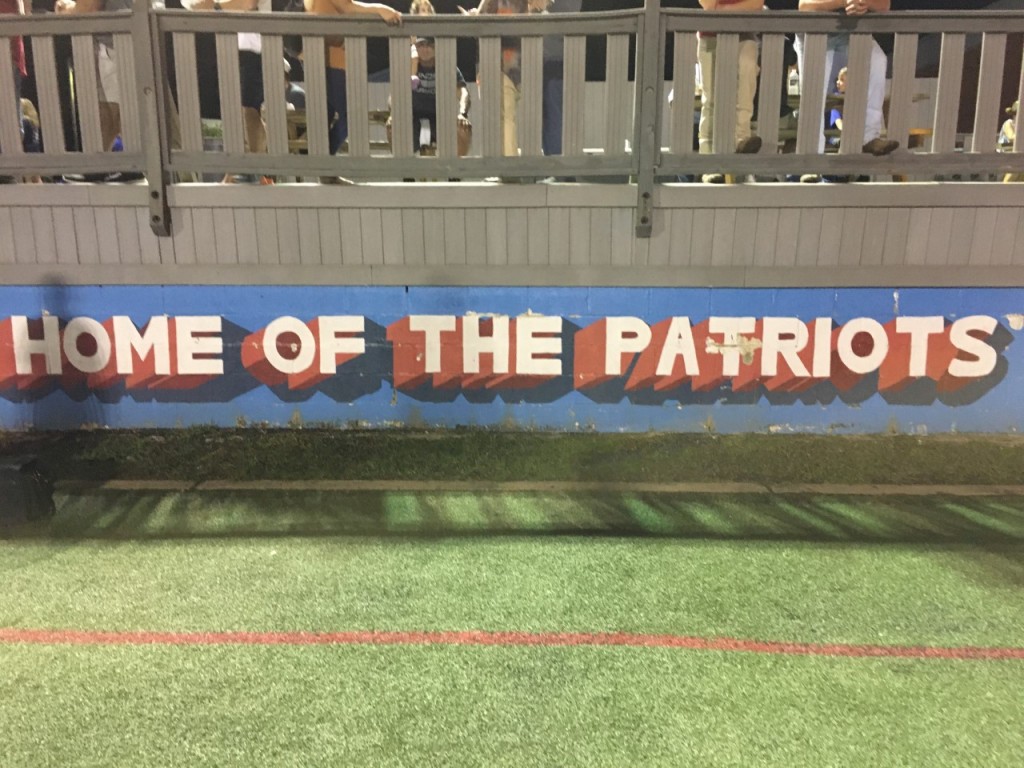 ACA (9-2) won its first round playoff matchup against the Munford Lions (6-5).

This game was a defensive grudge match in the first half as both teams combined to punt 6 times.

On the first Patriots drive in the second half, quarterback Carson Sute found Davis Dare for a 47-yard reception.

That would set up a 3-yard touchdown pass from Sute to Dare.

The Lions would retake the lead on their next drive when Slyvester Smith found Javion White from 9-yards out.

However, the Patriots got the ball back late in the 4th quarter and Sute found Eric Hines for the lead with 55 seconds remaining.

The Patriots will look to advance to the quarterfinals of the 4A playoffs as they host Andalusia (10-1). That game is scheduled for Nov. 11th, at 7 p.m.

Pickens County gets tough win to Advance to Next Round. 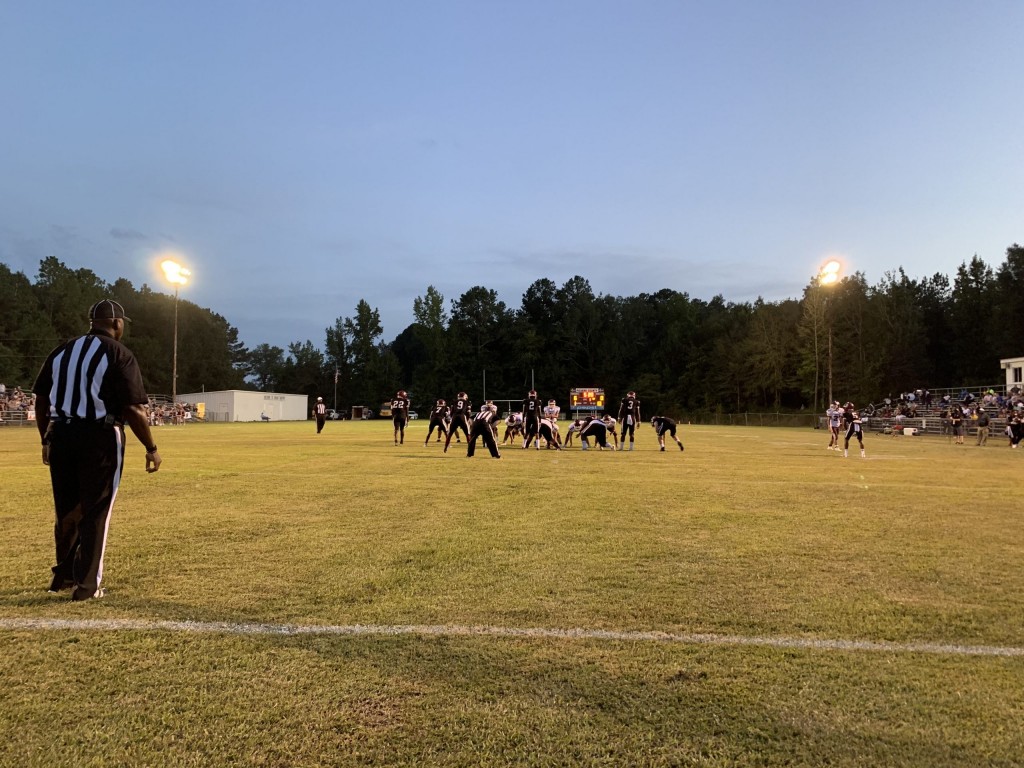 The Pickens County Tornadoes defeated the Wadley Bulldogs 34-15 in the first round of the Class 1-A playoffs.

The Tornadoes started the game early with a four play 61-yard drive. That was capped off by a three-yard run by Korbit Sommerville.

Wadley’s offense was able to get some footing after a couple of possessions, when Bulldog freshman running back Jacquez Wilkes has a goal line rushing score on the fourth down. The gutsy call pays off for the Bulldogs.

On the ensuing kickoff, Santonio Jones went for 85 yards to lift the Tornadoes to 12-7 in the second quarter.

After another error on special teams for Wadley. Pickens County was able to capitalize when a 26-yard run by Elijah Merriweather pushed them ahead even more, 18-7.

Wadley would eventually answer, when a 75-yard drive ended with Wilkes running through the inside gap for 55 yards. Cutting their deficit to three going into halftime 18-15.

Coming out of halftime both defenses played aggressively, but eventually Pickens County would connect for a long touchdown when quarterback Demarkis Giles hit the junior wide receiver, Kemaurion Plott, on a 57-yard bomb which put Pickens County up 26-15. The 2-point conversion was good.

The Tornadoes looked to put the game on ice but that would not come easy, Wadley’s Cortavion Lynch intercepted a ball from Giles in the red zone.

However, Wadley’s offense could not get anything going in the second half and with only 4 minutes left in the game, Pickens County would finally score with a 20-yard touchdown run by running back Caleb Hill.

Next week, the Tornadoes face off against the undefeated Meek Tigers in a road matchup for the second round of playoffs in Alabama.

Back-up QB stars as Warriors advance in Class 7A Playoffs 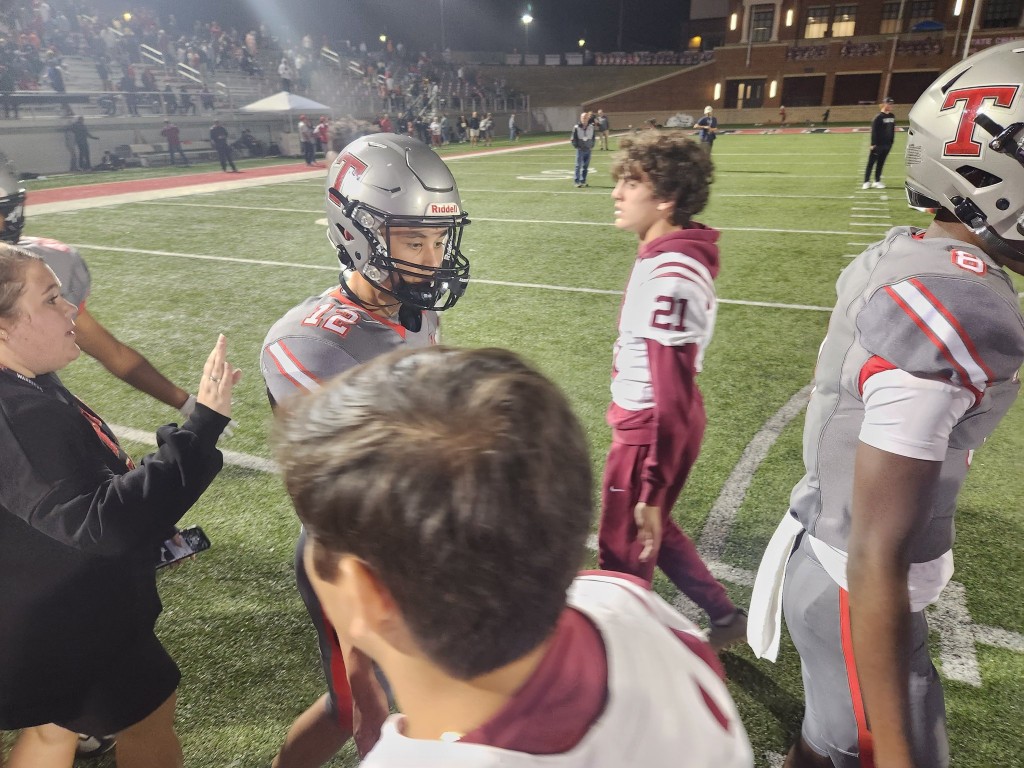 The Thompson Warriors got a big night from eighth grade quarterback Trent Seaborn in a decisive 34-0 win over Huntsville in the first round of the Class 7A playoffs.

Seaborn threw for 342 yards and four touchdowns in his first start of the season. Thompson’s usual starter, Zach Sims is dealing with an undisclosed injury.

Seaborn said he didn’t find out he was starting until shortly before kickoff against Huntsville.

“Me and Zach, we just have to be prepared. We don’t know who is going to be up,” Seaborn said. “But him and I, we are both ready.”

Points were not easy to come by early in the game. With under 40 seconds remaining in the first half, Thompson led 6-0 before Seaborn connected with receiver Korbyn Williams for a 37-yard gain, down to the Huntsville three-yard line. Two plays later, Thompson running back Michael Dujon finished the drive with a three-yard touchdown run. The extra point gave Thompson a 13-0 at halftime.

In the second half, Seaborn and Williams connected for a pair of touchdown passes. Williams finished the game with seven catches for 87 yards and the two scores.

Next week, Thompson will host Vestavia Hills in the second round of the Class 7A playoffs.

Jacksonville advances to next round in final seconds of game

The first round of the playoffs came with madness. The Jacksonville Golden Eagles versus the Bibb County Choctaws was no different, in a game that went down to the wire with both teams fighting for every inch for the opportunity to advance to the next round.

The Choctaws started out hot on offense after a few plays that landed them inside the five-yard line. Running Back Tyler Fielding punched it in to put the game’s first points on the board.

After a battle tested first quarter, the Golden Eagles took the opening snap of the second quarter Ky’dric Fisher shook off a slew of defenders on his way to the end zone to tie up the game.

The Golden Eagles did not stop the momentum on the ensuing drive. A lazy pass by the Choctaws led to a diving interception to give Jacksonville an excellent field position inside the red zone. The Choctaws would not relinquish points as they stood strong in their goal line to force a field goal. The attempt was missed, wide right, to leave the game knotted in a 7-7 tie.

Bibb County got the ball rolling again after a 39-yard pass landed them near the goal line. Fielding scored his second rushing touchdown of the first half. On the next play, the special team’s defense prevailed as the extra point was blocked.

The second half stayed just as contested with both teams trading touchdowns with Jacksonville scoring the final touchdown within the last 12 seconds of the game. They advance to the next round with a 35-28 win to send the Choctaws home with a crushing playoff loss after an electrifying regular season.

TPD: Rash reaction with infant can have devastating consequences