If you’ve driven past DCH Regional Medical Center you’ve likely noticed some changes. The hospital is building for its future. Beginning Jan. 2 the hospital will begin demolishing its current south parking garage and building a new one.

The current south parking garage is three stories and has about 700 parking spaces. The new parking garage will have four levels, bringing the total number of spots to more than 900.  DCH administrators are excited to show off the space to the community but understand the improvements but know the renovations will come with some inconveniences.

In addition to the new parking garage there will also be a renovated south lobby. The lobby will compliment the hospital’s Lewis and Faye Manderson cancer center. Some of the renovations include new terrazzo floors, updated LED lighting, and several artistic designs.

“As you enter the new south lobby it’s going to have those sliding glass doors, lighter colors, you’ll see on the walls that there’s going to be some attractive design features, so it’s going to be very inviting and open and airy,” said Andy North, DCH spokesperson. 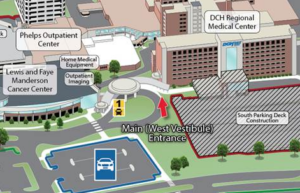 A new, temporary entrance known as the “West Vestibule” will open when the current entrance closes.

For convenience, hospital patients and visitors are allowed to park in a new parking lot across the road from the “West Vestibule” located west of the south lobby entrance. A shuttle is available to carry people to and from the parking lot.

The renovation is expected to take two years and will cost roughly $30 million.