BREAKING: Shooting on The Strip near the University of Alabama

Tuscaloosa Police (TPD), the University of Alabama Police (UAPD), Tuscaloosa Fire Rescue, and Northstar EMS all responded to the Walk of Champions shortly before 2:00 a.m. Sunday. 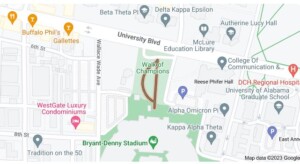 WVUA 23 was told that it was a “crime scene” and that TPD was the lead investigating agency. Northstar EMS said they could not release any information due to HIPAA privacy rules which protect certain health information.

A black Jeep was pulled over outside of Bryant-Denny Stadium along the Walk of Champions on University Blvd.

Meanwhile UAPD sent out a news release shortly after 3:00 a.m. The release states that UAPD officers responded to a shooting on Grace Street near The Strip around 2:00 a.m. The map shows the distance between Grace Street and the Walk of Champions as less than a half-mile. 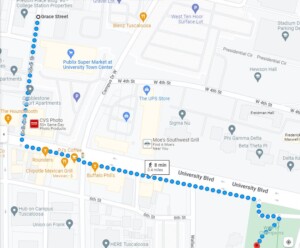 Grace Street was blocked off overnight as police used drones to search the area.

According to UAPD the shooting occurred on January 15 just before 2:00 a.m. Police say the shooter and a passenger drove off  heading east on University Blvd in a yellow Dodge Charger.

Police have one person in custody and are working to confirm details of the shooting and additional information. Police do not believe there is any current threat to the campus community.

This is a witness description of the remaining person of interest: 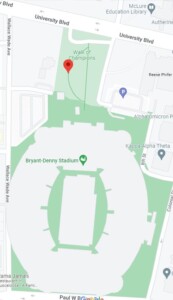