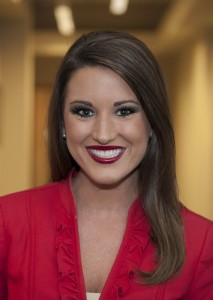 Chelsea Barton is no stranger to West Alabama, she grew up right here in the Black Belt. A native of Marion, Alabama, Chelsea graduated with honors from Judson College in 2010 with a Bachelor of Arts in English and Journalism.

She came to WVUA 23 as an intern in 2011 with the goal of climbing the ladder and reporting news to the area she calls home. That dream became reality in 2014 when she became part of the WVUA 23 news team full-time as a reporter.

When she’s not working on stories or out covering breaking news, Chelsea enjoys painting, refinishing furniture, exercising and loving on her St. Bernard, Gent.

Chelsea was awarded first place at the 2018 Alabama Associated Press Awards for Best Lifestyle Feature. Her winning story focused on an autistic teenager targeted by thieves. Chelsea’s story connected the young man with people around our community who replaced the items stolen from him.

Chelsea loves working in West Alabama and making a difference.

If you have an idea for a story or want to pass along a news tip, please email Chelsea at cbarton@wvua23.com.