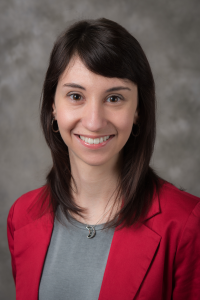 Andrea Matei started out at WVUA 23 as an intern in August 2014, while she studied journalism at the University of Alabama. After a brief break after college, she was hired as a producer for the News at 6 in June 2017. Andrea also goes out to cover news and report. She anchors WVUA 23 News at 10 on Saturdays.

Andrea also supervises the internship program at WVUA 23. With about 50 students coming through each year, it is one of the largest and most comprehensive television educational experiences in the country.

Andrea is no stranger to West Alabama, having lived in Tuscaloosa since 2002. She found out she wanted to be a journalist at Hillcrest High School, where she was part of the small core group that started the first school broadcast program in the Tuscaloosa County School System.

Andrea grew up in Germany, and enjoys teaching others about her culture, and learning about other people’s. When she gets time off work, she likes to travel, watch live music, cook and try new foods and recipes, and watch soccer.

If you have an idea for a story or want to pass along a news tip, email Andrea at asmatei@wvua23.com.

Get connected with Andrea: @AndreaMatei